How did Germany recover from World War II

Reconstruction in the Ruhr area

Reconstruction after World War II was closely linked to the resurgence of the mining and steel industries. It can be divided into two sections. A first phase from 1945 to 1948 and another until 1957. 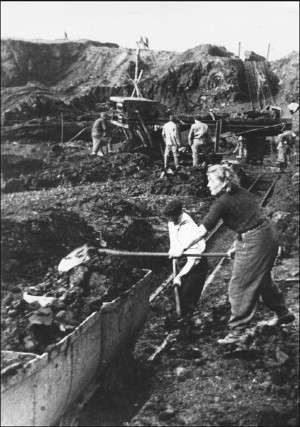 reconstruction
Source: Gelsenkirchen City Archives
The years between 1945 and 1948 were completely under the impression of enormous destruction, hunger, the housing shortage and then the first hesitant steps into a new future. The uncertainty was heightened by the dismantling, the unbundling of the cartel-like corporations, the imposed production restrictions, galloping inflation and general economic chaos. This was followed by the ten years of the actual upswing. The population of the Ruhr area and industrial production expanded. From the low point in 1945, production had at least quadrupled by 1955. Within these ten years, a modern industrial society developed in Germany that produced undreamt-of prosperity. Aptly, the term "economic miracle" prevailed for this. When the last war returnees were released from Soviet captivity in 1955, they returned to a completely new country.
The Ruhr mining industry recovered the fastest from the aftermath of the war. At 33.4 million t, production in 1945 only reached the level of the 1860s. All above-ground facilities such as coking plants, briquette factories and conveyor systems were badly damaged. Underground, however, the destruction was limited. For example, operations could be resumed at Consolidation 3/4/9 in Gelsenkirchen as early as 1945. All over Europe there was a shortage of coal after extremely cold winters. In this situation, mining played a key role in western reconstruction. There were therefore no restrictions as in the steel industry. 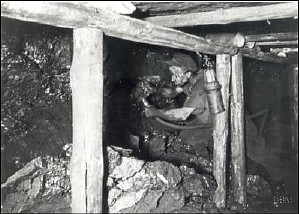 Miner during extraction by hand with a pick hammer
Source: German Mining Museum / Mining History Documentation Center
The steel industry, on the other hand, could not go over to "business as usual" so quickly. For a long time, the uncertainty about dismantling hovered over the company. The London Six Power Conference from February to June 1948, at which representatives of the Netherlands, Belgium and Luxembourg also took part for the first time after the war, decided to include the three western zones in the European reconstruction program, the Marshall Plan, and to initiate a currency reform to cope with advancing inflation. The resources of the Ruhr area should be made usable for the reconstruction of Western Europe as a whole.
After that, the steel industry was able to gradually recover, especially since the Korean War (1950-1953) increased the demand for steel products. Until the beginning of the 1960s, the steel industry was to remain the economic engine in the Ruhr area and in Germany. The production of raw steel blocks in 1964 was 70% higher than in 1938. The coal and steel industry quickly became the mainstay of the economy in the Ruhr area and all of Germany. The development of the workplace reached its peak as early as 1957. With 994,000 employees in traditional production areas, the Ruhr economy was back in full swing. Even if the reconstruction boom slowly weakened again from 1964, the Ruhr area - measured by average earnings - ranked in a top position in Germany until the 1970s.
<?