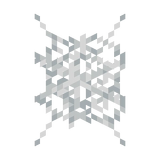 The Spider web (also Cobwebs called) is a block that slows the player and most other objects as they pass through.

Cobwebs can be found individually in mines in many places. In addition, the spawners of cave spiders are surrounded by it in large numbers.

They also hang in fortress libraries, and there is a single network in the laboratory of some igloos. Individual rooms in forest properties also contain spider webs and they can also be found in the zombie villages.

A spider web drops a thread when you destroy it with a sword or a piston. It will drop itself if you tear it down with scissors.

If the spider web is broken down with a sword, it will be used up twice as quickly.

Spider webs provide threads and are used to slow down or reduce the fall damage of players or creatures, and they are also used for decoration, in which several together represent a plume of smoke that rises from a chimney, for example.

The recipe only exists in the Bedrock Edition