What is maglev train 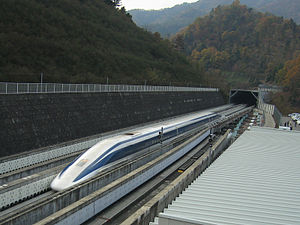 The Japanese magnetic levitation train JR-Maglev is still being tested. It set a new record in 2003: it was 581 kilometers per hour. No other rail vehicle has ever been faster.

A maglev train is a type of railroad or tram. With this type, the trains do not run on the rails themselves. Instead, they float above the rails because of strong magnets. There is still a little space between train and rail.

The maglev train has a number of advantages. Because the train and rails don't touch, they don't rub against each other. This will not slow you down as much. In addition, they do not wear out as quickly, there is no dust and less noise. A maglev train can accelerate quickly. That is, it reaches a high speed very quickly.

There are also similar techniques: The Wuppertal suspension railway is called that, but does not float. Your wheels just move on the rails. Only the rails are on top and the train is hanging on the bottom. You can't see the rails from below, so it looks like the train is floating.

How does a maglev train work? 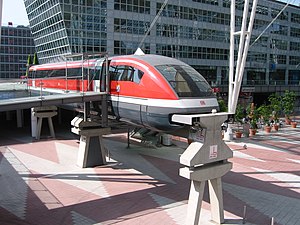 A Transrapid in an exhibition. You can easily see how the train reaches around the rails.

Electromagnets ensure that the train can float. An electromagnet is a magnet that works on electrical current. It only becomes magnetic when you switch it on. Then the train and the rails repel each other and the train floats. If you turn off the power, the train is back on the rails. In order for the train to move forward, there are various motor systems that also work with electromagnets.

As early as 1935, a German engineer came up with a maglev train. But it wasn't until almost 50 years later that the technology was so advanced that a maglev train could actually be built.

Initially, they were tried out on short test routes. The Transrapid, for example, was a magnetic levitation train for testing. The test track was 32 kilometers long and was in Lower Saxony. In 2006 there was a serious accident there: 23 people died. That is why Germany waived two other planned routes.

The only maglev train in the world now runs in China. The route is 30 kilometers long and connects the city of Shanghai with the airport. The train only needs a little more than seven minutes. It drives up to 430 kilometers per hour. That is a little faster than a fast ICE, i.e. a high-speed train.

Why are so few maglev trains running?

There is a simple reason why so few maglev trains run: there are already so many trains and trams in the world. They actually work well. It would not be worth building a magnetic levitation train alongside such a route.

In addition, the technology of the maglev trains is very complicated. You always have to make sure that the magnet does not work too strong or too weak. The construction of rails for maglev trains is more complex than with normal rails. Due to the constant hovering, it needs more energy than a normal train.

Magnetic levitation trains are only slightly faster compared to railways, but cost a lot more. Many people prefer to travel straight away by high-speed plane, even though this requires more energy and is more polluting.

There are also other search results for “Magnetic Levitation” from Blinde Kuh and Ask Finn.