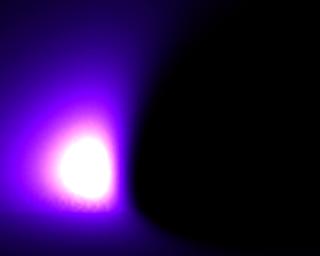 Black holes are perhaps the most incredible objects in astronomy: it's a mass so tightly packed that it even prevents light from escaping. As a consequence, a black hole is black and therefore difficult to detect in the sky. However, the astronomers have developed clever methods to find masses in the sky, even if they are not shining. On the basis of this indirect method has succeeded in observing a large number of candidates for black holes in the sky.

That was basically the definition of a black hole as an astronomical observer would put it. However, there is also a stricter, mathematical definition. It is based on the General Theory of Relativity (GTR), a theory of gravity that Albert Einstein developed almost a hundred years ago. According to this theory, gravity is a geometric property of space and time. Einstein showed that space and time cannot even exist independently of one another. This is how the concept of spacetime came about. This spacetime can be imagined as a mountain range with mountains and valleys, ups and downs, or as one says in the ART: with Curvatures. A black hole is now a very special spacetime, one whose curvature increases from outside to inside and which finally becomes infinite in the center of the hole. This place is called Singularity in the ART. In this sense, a classic black hole is a singular solution of Einstein's field equations of GTR.
Since light now also follows curved paths in a curved space-time, the so-called (zero) geodesics, the light also moves in the direction of the infinite curvature. Unfortunately, the light doesn't come out there. As a result of this property, black holes are black.

There are different types of black holes, those that rotate and those that do not. Holes that have an electrical charge have even been found in theory. All of this is possible with the methods of mathematical physics. You 'only' need Einstein's fundamental equation of the GTR: Einstein's field equations. All black holes are solutions to these field equations. It is a tensorial equation that can hardly be understood with the help of school mathematics. Tensors are geometric objects that have a physical relationship in the GTR. In the field equations, the curvature of space-time is represented by the Riemann tensor, while the mass and energy are in the energy-momentum tensor.
Black holes can be represented mathematically as a metric tensor or line element. If you insert this representation - this spacetime - into the Einstein equations, the equations are solved. In the words of the classical Newtonian theory of gravity of the 17th century, a theory of gravitational fields and gravitational forces, black holes are a certain form of a gravitational field, namely one that can capture light. Newton would certainly not have understood this formulation, because he did not know that light has mass. But that is precisely what Einstein's famous equation says E.=mc2which he derived within the framework of the Special Theory of Relativity (SRT) in 1905. (Note: light has mass because it has energy - but light has one Quietmass zero, i.e. in the frame of reference that moves with light, light has no mass.)

The singularity of black holes can be imagined very clearly: If the hole does not rotate, it is one Point mass. It gets more complicated when the hole rotates: then it is a question of one Ring mass, or as it is called in the GTR, a ring singularity.
As part of the ART, these different black holes have been given names:
The rotating, electrically neutral shape of a black hole is called the Kerr solution. The non-rotating one, well static and the electrically neutral type is called the Schwarzschild solution. Historically, the structurally simpler, spherically symmetric and static Schwarzschild solution was found first (Karl Schwarzschild, 1916). A Schwarzschild hole has only one property: mass M.. The rotating, axially symmetric, stationary generalization was discovered much later (Roy P. Kerr, 1963). Kerr holes have two properties: mass M. and angular momentum J. The rotation can be controlled using the Kerr parametersa parameterize.a = J/Mc is a specific angular momentum (angular momentum / mass) and can be used when using geometrical units (G = c = 1) any values ​​from the range of numbers between -M. and +M. accept. One sets for further simplification M. = 1, the range of numbers that defines the angular momentum of a rotating hole becomes the interval [-1; +1]. The excellent case a = 0 characterizes the Schwarzschild solution, at a less than zero there are retrograde (counter-rotating) rotations, otherwise prograde (the direction of rotation is important as soon as particles or stars circle around a hole).

At most three properties!

The mentioned metrics, Kerr and Schwarzschild geometry, are Solutions of the field equations in a vacuum. Vacuum means that the energy-momentum tensor vanishes. This can be called a relativistic vacuum, which must be strictly distinguished from the quantum vacuum.
The electrically neutral black holes are spacetime (four-dimensional manifolds: one time dimension, three space dimensions), which are therefore completely in a vacuum.
As indicated, there are also those electrically charged Generalization of a black hole. The electrically charged, static counterpart to the Schwarzschild solution is called the Reissner-Nordstrøm solution (1918). A Reissner-Nordstrøm hole has the properties of mass M. and charge Q.
The most general form of black holes is represented by the Kerr-Newman solution (1965). These holes have three properties, namely mass M., Angular momentum J and electric charge Q. Kerr-Newman holes have the 'most hairs' (see no-hairs theorem).
In contrast to Schwarzschild and Kerr geometry, Reissner-Nordstrøm and Kerr-Newman space-time are no vacuum solutions Einstein's field equations: the energy-momentum tensor is here the Maxwell tensor, because a charge creates an electromagnetic field in its environment. The GTR field equations that solve these charged black holes are called Einstein-Maxwell equations. However, all forms of electrically charged holes seem to be irrelevant in astrophysics because plasma flows in the area would neutralize this charge. The majority of astrophysicists therefore only discuss the existence of the Kerr and Schwarzschild holes. No black hole with an electric charge has been observed yet - although some candidates that rotate; e.g. the super heavy hole in the center of our home galaxy.

To the subject Black hole

What all black holes have in common is the property discussed at the beginning that particles and radiation that come too close to them are irretrievably (as one assumes) lost: they are 'swallowed'. This is to be understood in the sense that the hole only absorbs the mass and angular momentum of the incident objects: it grows. However, this only happens if the specimens come really close to the event horizon (the outer horizon). This is why they are called 'black'because every type of radiation (including light) that passes this critical (zero) surface reaches the interior of black holes. Seen from the outside, they appear black because no radiation flux from the region smaller than the horizon radius reaches the observer and is absorbed. The event horizon is however no solid surface as with stars or planets, but rather a mathematically defined boundary surface: the escape speed is here equal to the speed of light in a vacuum c, and since radiation or particles, according to the special theory of relativity, cannot move faster than light, they have no choice but to disappear in the black hole. The definition of the outer horizon is just rH = M + (M2 - a2)1/2, with the mass of the black hole M. and the rotation parameter a (Extreme Kerr: a = M., Torne's limit: a = 0.998 M., Schwarzschild:a = 0).