How can I make good comments

"Finally a step in the right direction!"

Lawsuit at the BVG dismissed

Berlin (dpa) - At the beginning of the next school year, it will be mandatory to wear school uniforms at all state schools in Germany. The government bill passed since March will come into force without restriction. The lawsuit, which some pupils from a secondary school in the district of Nürnberger Land had submitted to the Federal Constitutional Court, was dismissed yesterday.

The model of the new law can be found in England and the USA. Here the school uniform has been the rule at state mainstream schools for decades. Above all, differences in origin and social class should be leveled with uniform clothing. With this law it is hoped that envy and feelings of inferiority and especially the resulting violence among students can be combated. In the past few years, the number of violent attacks, which focused on "stripping" expensive branded clothing, has skyrocketed. Ultimately, however, in the eyes of its proponents, the school uniform should eliminate all unequal treatment in schools and thus finally achieve the desired equal opportunities. “Finally a step in the right direction!” Said the chairman of the Association of Common Teachers (VGL) Helmut Geister in a press conference. Last year, his insistence and commitment led to the foundation of the “Same clothes - Same education” initiative, which was supported by all parties and parents' associations. After the court ruling was announced, he emphasized that a "new and peaceful calendar in Germany's schools" was now dawning. 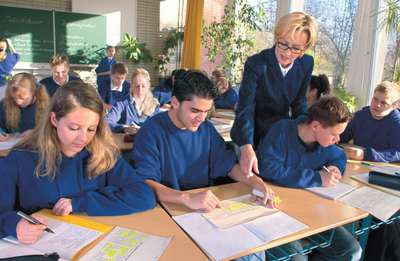 What do I want to achieve?
My goal is to be clear about my own opinion. It is intended to stimulate thought and help the reader form his own opinion. This gives me my most important points:

How do i start?

But how do I start? Research:
As you know, the center of a comment is the author's opinion. To do this, he does not have to be affected by the topic of his comment himself, as in a personal statement. But he must know enough about his subject.

Before writing, you not only have to be clear about your opinion, but also collect additional background information beyond your level of knowledge that supports your opinion.

What else should I consider?

A comment is a factual type of texti.e., even when it comes to a personal opinion, it should not be personal. The opinion is still based on arguments.

Nevertheless, to a certain extent you can use the Language creative and ironic deal, especially when it comes to refuting the arguments of his possible opponents.

The latter can be particularly striking and eye-catching heading must be taken into account, which should first draw the reader's attention to the comment.

Even if the comment is about arguments, you do not have to think compulsively about the structure of an argument that you have learned. You can and should move more freely here in writing.

If only everything was so easy

The places in the text where the author's opinion can be identified are highlighted.

There have been many and long discussions about the uniformity of students for years and one point that was quickly brushed off the table was the objection that the school uniforms obscure every individuality of the students. In view of the fact that the free development of the personality is anchored in the Basic Law, this seemed to be a major encroachment. But nobody seems to mind - children and young people apparently still do not enjoy the protection of the Basic Law.

The fact that children in uniforms in East and West Germany do not evoke good historical memories did not seem to deter anyone from voting for it. Many say that this would strengthen the cohesion and the sense of togetherness. Like many others, however, I am of the opinion that external uniformity also creates equality of thoughts. And in Germany, as in every other country, that should be avoided as much as possible. Especially with our historical experience.

In the end, the most important argument was repeatedly mentioned that one wants to fight bullying through the school uniform. And here those responsible really don't seem to have done their homework. Different clothing is and has never been a cause of bullying, at most a symptom. It is about feelings of inferiority, weak self-confidence, fear of social decline or a low tolerance for frustration. Here clothing is only an expression of various causes, not their starting point.

And so the school uniform is really not going to solve any of the problems that school has today. Those responsible really have to get detained properly here.

During your school career you have come across different types of text that you can use to express an opinion. The writing plan is always similar, but there are small differences overall.

In a discussion or the written argumentation you discuss a given topic and try to illuminate it from different angles. It can also be about clarifying yourself about a particular problem. In the end you come to an opinion.

The reasoned opinion always has a topic as content that directly affects you. Therefore, the text is often kept more personal, e.g. as a letter.

The comment usually appears in the newspaper and relates to a current event or news item. This is commented critically by presenting various arguments and further background information. The author does not have to be affected by the topic himself.