How does the charging technology differ from Oppos VOOC 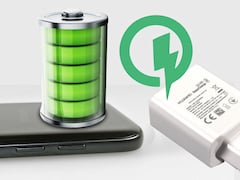 Fast charging systems help to shorten the charging times for cell phones.
Graphics: Destina - fotolia.com, photo / montage: teltarif.de. Unfortunately, it is a fact: the lithium-ion batteries currently used in smartphones are reaching their limits in terms of capacity. The battery chemistry can only store a limited amount of energy per unit volume - and the volume available for the battery is also quite limited with current smartphones.

The manufacturers have therefore packed the batteries more and more tightly, making use of every free space, because smartphones are more and more energy-hungry. Unfortunately, this only works for a while, as the case of the unfortunate Samsung Note 7 impressively demonstrated. Such densely packed batteries have to be manufactured with particular care, otherwise fiery surprises threaten.

Fast charging systems help to shorten the charging times for cell phones.
Graphics: Destina - fotolia.com, photo / montage: teltarif.de. The manufacturer's solution: If you cannot significantly increase the capacity of batteries, then you just have to charge them more often and, above all, faster. And so it is now considered good form for all manufacturers to have a quick charge function in their range. The principle is simple and actually always the same: the technology increases the charging power and thus shortens the charging speed. Depending on the provider, the batteries should be full again in just over half an hour.

There are a number of fast charging systems and one of the first to develop such a system was Qualcomm. The system is simply called Quick Charge and there is already version 3.0. In this version, it works with charging voltages between 2.6 and 20 volts, which are adapted to the charge status of the battery in 200 mV steps. The maximum charging power is 18 watts. The voltage regulation reduces the waste heat and optimizes the charging time.

Quick Charge also monitors the battery temperature. If this reaches 40 degrees, then the system regulates the charging power down and thus protects the battery chemistry, which would be damaged at even higher temperatures. Quick Charge compatible batteries therefore need a temperature sensor in addition to careful production. A normal USB socket is sufficient for connection to the mobile phone.

With Quick Charge 3.0, batteries can be brought to about half their nominal charge within half an hour. But you should take more time for the rest. Li-ion batteries have a logarithmic charge curve, which is why it takes a long time to squeeze in the last few percent of energy.

The biggest sticking point of Quick Charge: It only works with Snapdragon processors and Qualcomm pays off the licenses properly.

USB PD takes the wind out of Qualcomm's sails

In fact, Qualcomm has already announced a version 4 of Quick Charge. The should be introduced with the Snapdragon 835 and bring 50 percent charge within 5 minutes. But nothing came of it. Because Qualcomm has given up the race in favor of USB Power Delivery (USB PD). Quick Charge 4 and Quick Charge 4+ combine the old Quick Charge 3 standard and charging via USB PD with up to 27 watts.

The USB PD was developed by the USB Implementers Forum and describes charging via the USB-C socket. There are five profiles, the two devices involved negotiate which of them is used. The cable, with a chip in its plug, which also monitors that no more energy is transferred than the cable can withstand, serves as an intermediary. The profiles range from 5 volts and 2 amps charging current to 20 volts and 5 amps. If only a simple USB-C cable without a chip is connected between the two devices, the charging current is limited to 3 A, which means 15 watts of charging power at 5 volts. With normal-sized type A plugs, 25 watts are achieved.

The standard was originally designed for laptops and is intended to replace the many proprietary connections. Profiles 4 and 5 are less for smartphones than for computers and peripheral devices such as monitors. Microsoft, Intel and Apple, among others, are also involved as co-initiators. The advantage: The charging technology is independent of processors and both mobile phones and laptops can be charged with a single charger. It is even theoretically possible to charge PCs via power banks.

Apple is taking the implementation seriously. iPhone 8 or iPhone X already use this standard and Apple is already installing the new charging technology in MacBooks. However, to use it with the iPhone, you need a power brick and a USB-C to Lightning cable. The included utensils do not support the standard.

However, there still seem to be problems with the standard. Sometimes there are communication problems with devices from different manufacturers. The result is slow loading processes on the lowest common denominator. There are also gaps in the specification. For example, it has not yet been clarified what happens when two power sources are in the USB network. And the 100 watt upper limit could mean for some power-hungry notebooks that they need a separate power input.

In addition to these two standards, there are plenty of others that are all based on the same principle: To pump a lot of energy into the batteries in a short time. As a rule, however, they are not compatible with one another. The reason: Manufacturers want to sell their own accessories and are changing the standards slightly so that they only work with their own devices.

Exceptions prove the rule. For example, the Adaptive Fast Charge from Samsung is compatible with the Motorola Turbo Charge. It is based on Qualcomm's Quick Charge 2.0 and thus has a charging power of up to 18 watts.

SuperVOOC: Full in half an hour

VOOC (Voltage Open Loop Multi-step Constant-Current Charging), on the other hand, is a proprietary standard from Oppo. It requires special chargers and cables and only works on compatible smartphones. The cables used are double-wired so that, according to Oppo, up to 25 watts of charging power can flow. The electronics keep the charging current constant and regulate the voltage. This has the advantage that the power loss occurs more in the power supply and not in the battery. It stays cooler and can therefore also be charged faster. In 35 minutes, 75 percent of the energy reserves should be restored, it takes around 70 minutes to fully charge.

The Oppo Find X has already built in the SuperVOOC expansion. The technology uses a special battery technology with two cells connected in series and charges with almost 50 watts. This means that the battery is full in a good half an hour. 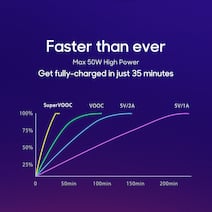 SuperVOOC is currently the fastest charging standard.
Graphics: Oppo In addition to Oppo, the subsidiary OnePlus also uses VOOC. The standard here is called Dash Charge. But OnePlus is at odds with the headset manufacturer Bragi because they have secured the name "the dash" for their products. This is why the technology is currently simply called "Fast Charge". Incidentally, OnePlus devices are not compatible with Quick Charge despite the Snapdragon processor.

Also worth mentioning is Pump Express, the standard from MediaTek. It only works with devices that use the in-house chips, but also supports USB PD 3.0. Version 4.0 is currently up-to-date, it provides 5 amps of charging current.

Apart from the socket, even the best fast charging system does not help. Instead, you have to access an external battery here. There are tips for buying in our guide.