Why are cat tongues rough

You can find out here »

The cat's tongue: a tool for eating, drinking and grooming

Have you ever looked at your cat's tongue or felt the rough feeling when she licks the back of your hand with it? The little house tigers have a different tongue structure than humans and are therefore perfectly adapted to their living needs. Take a look at the structure and function of the cat's tongue.

The cat's tongue is a long muscle that, at first glance, looks quite similar to the human tongue. In a soft pink shade, it fills the oral cavity and is important for the intake of food and fluids. But why do cats have a rough tongue? The answer to this is provided by the so-called papillae.

Three different types of papillae on the cat's tongue

A cat has a total of three different types of papillae on its tongue:

What are the hook-like papillae good for?

The cup- and mushroom-shaped papillae are used by your cat to determine taste and help, for example, to distinguish spoiled food from digestible things. The hook-like papillae have nothing to do with taste, but rather fulfill three functions:

1. They help you eat because they can rub meat off bones.
2. Their structure prevents water from running off the tongue immediately when you drink.
2. They act as a "natural hairbrush".

The cat's tongue - a look into the detail: while eating and drinking

Since the cat's tongue has comparatively few taste buds, the sensory impression of taste is not one of its main tasks. Nevertheless, the cat's tongue is perfectly tailored to the needs of your four-legged friend.

The corneal layer of the hook-like papillae gives your cat a kind of "innate sandpaper". She can use it to grind hard food components. In nature this was mainly used to rub off leftover meat on a bone. The modern house cat uses the rough surface more for dry food and to test toys for their ability to be eaten.

When drinking, your cat leans over the bowl or outside over a puddle. Since the head is pointing downwards, moving the tongue alone would run out of the mouth before the cat can swallow it. The tiny barbs on the surface skillfully prevent this, so that more water droplets remain on the cat's tongue.

Intensive grooming with the cat's tongue

Even the kittens learn from their parents how important daily grooming is. They mainly use their tongue and, at most, the front paws for the back of the head. Thanks to the hooks, the cat's tongue serves as a natural brush, in which not only loose fur gets stuck, but also flakes of skin and dirt.

The tongue works together with the teeth. You have probably already seen your cat not only licking its fur, but also carefully nibbling on it in some places. This gentle biting into it brings the incisors into position. They are used to remove solid pieces of dirt or vermin from the fur. Once loosened, the cat's tongue licks over them and picks up the loose things.

Good to know: In order for the cat's tongue to be able to cope with intensive grooming, it must always be moistened. Therefore, in addition to the mucous membrane, there are also several salivary glands on the tongue. These secrete their saliva both when eating and when grooming. In fact, your cat loses so much saliva during her daily grooming that she has to drink fresh water afterward. So don't just provide her with a drinking bowl when she eats, but at all times.

Veterinarians have now been able to prove that the barbs of the cat's tongue are not permanently upright. Only when eating, drinking or grooming the tiny spines erect and fulfill their functions. At the same time, the cat's tongue becomes a little wider due to better blood circulation, so that more space is available.

While your cat has closed its mouth, its otherwise rough tongue is likely to be rather soft. This mechanism is very convenient because it prevents the cat's tongue from irritating the throat and gums. At the same time, the hair and dirt loosened during grooming can be more easily swallowed. If the tongue remained rough, your cat would have problems getting rid of the small fur balls. 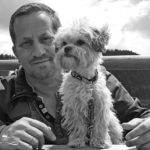 As the author and editor of Tierischehelden.de, I would like to help you understand dogs and cats even better. I have been a great animal lover since childhood and share my experiences from over 12 years of keeping dogs and cats.