Why do games go viral 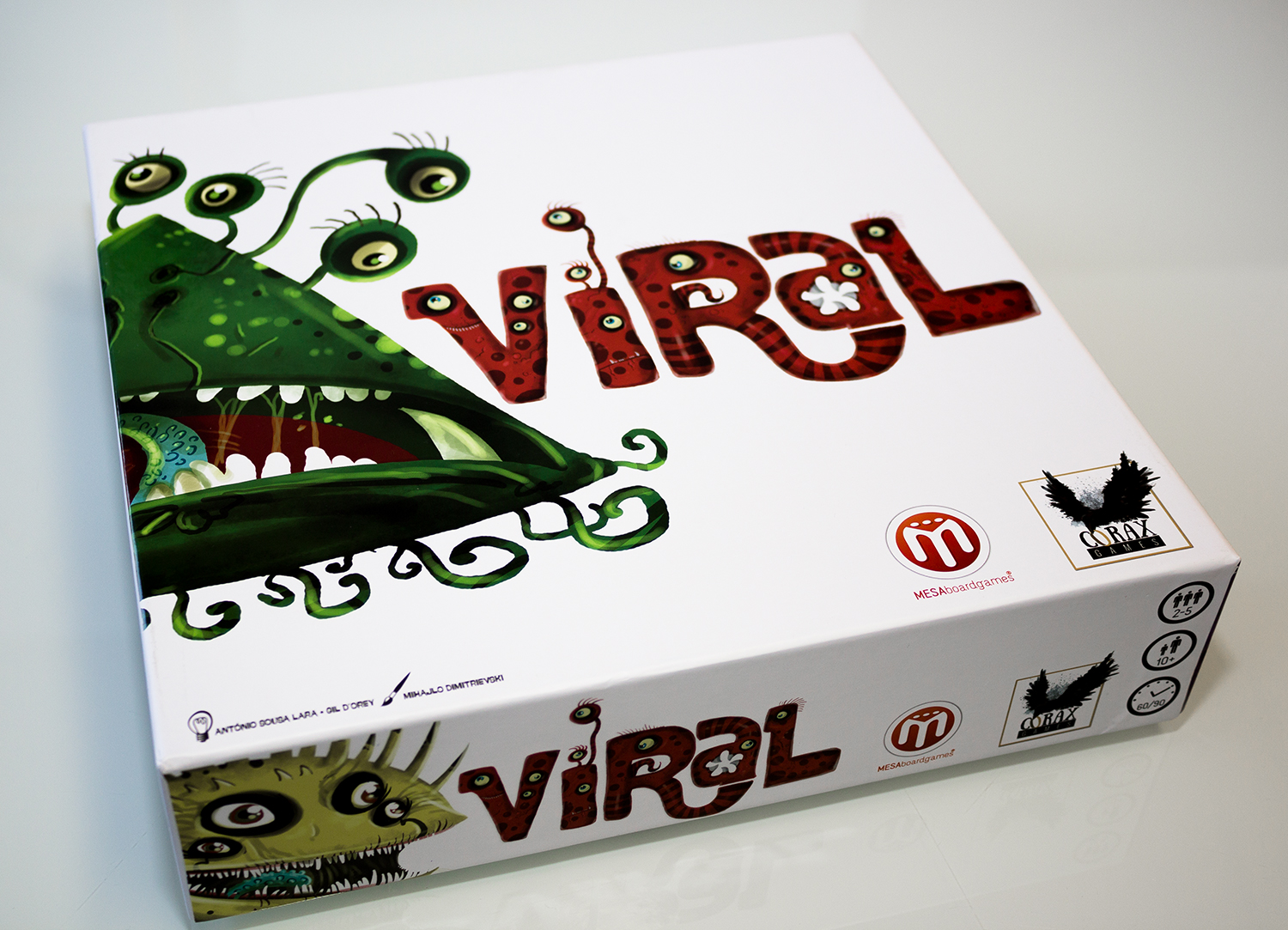 Written by Daniel Krause on.

Viral was published by Corax Games in Germany in 2017. The game is for 2-5 players, ages 10+. The game looks good and focuses on the essentials. The players take on the roles of viruses and infiltrate organs that are depicted abstractly. We took a closer look at the game - in keeping with the current wave of influenza.

Each player receives 6 zone cards and 5 basic mutation cards, the markers and the virus tokens of his color. Now everyone gets a game board. The playing field is laid out, the phase counter, zone and collapse markers are placed and event cards as well as mutation cards are laid out. The starting player receives the starting player marker, then the last player begins to place a virus tile and continues in reverse order. Now the game can start. 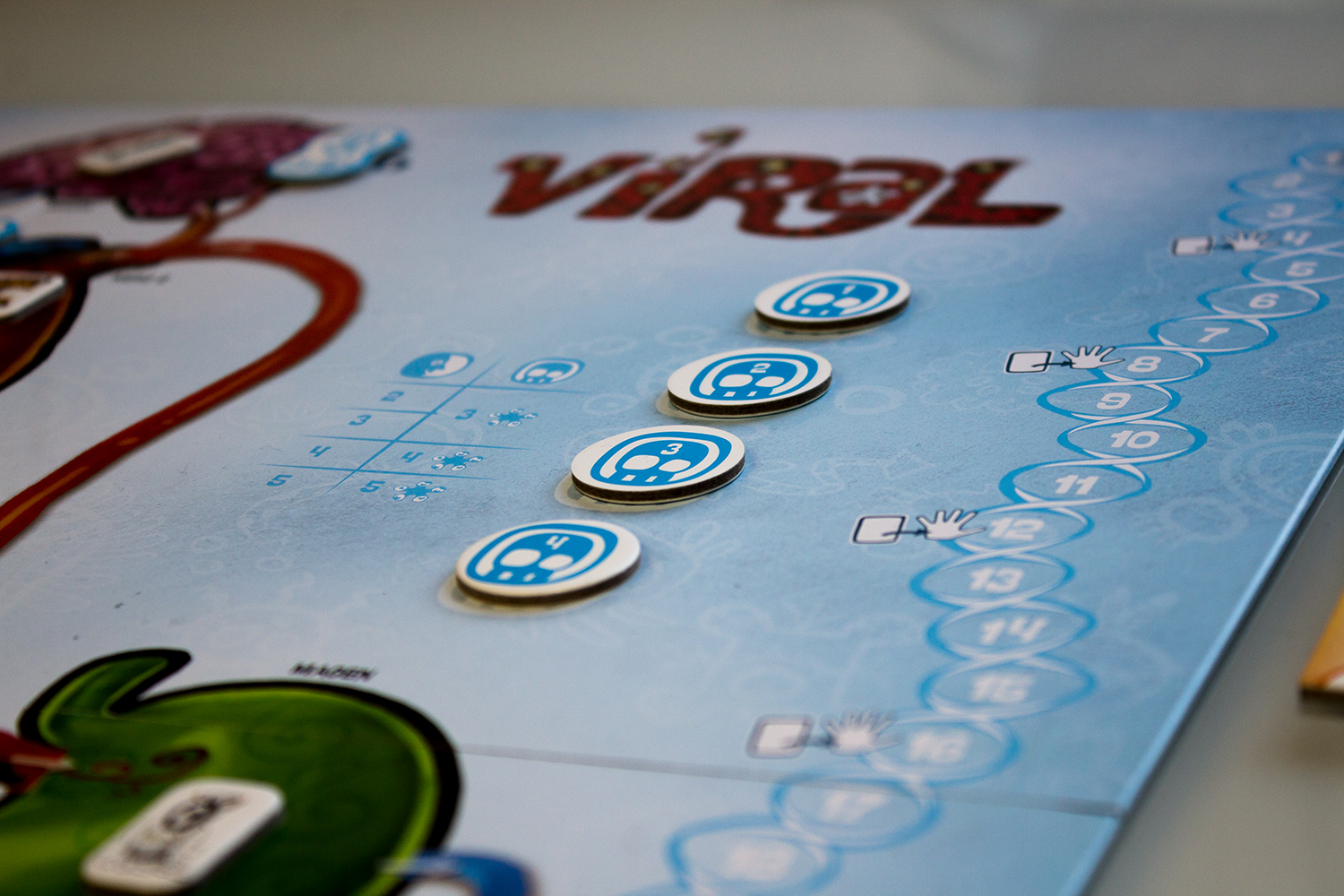 This is how the game works

Each round consists of 6 phases and 6 rounds.

The starting player begins by choosing a zone card and a mutation card and then placing it to the left of his tableau. Then it is the next player's turn. When all players have placed, all reveal at the same time. The action (s) of the selected mutation card, which are highlighted in blue, may only be used in the zone played at the same time. All other actions can be used anywhere. Now, for example, new viruses are placed or they can be protected. If there are too many viruses in an organ (this depends on the number of players) it receives a collapse marker.

When the round is over, the cards are placed face down to the right of the tableau and the same procedure as above is repeated. At the end of the first phase, you clean up by taking the cards above the player board back into your hand. Now the cards on the right and left of the current round move across the shelf and remain there. 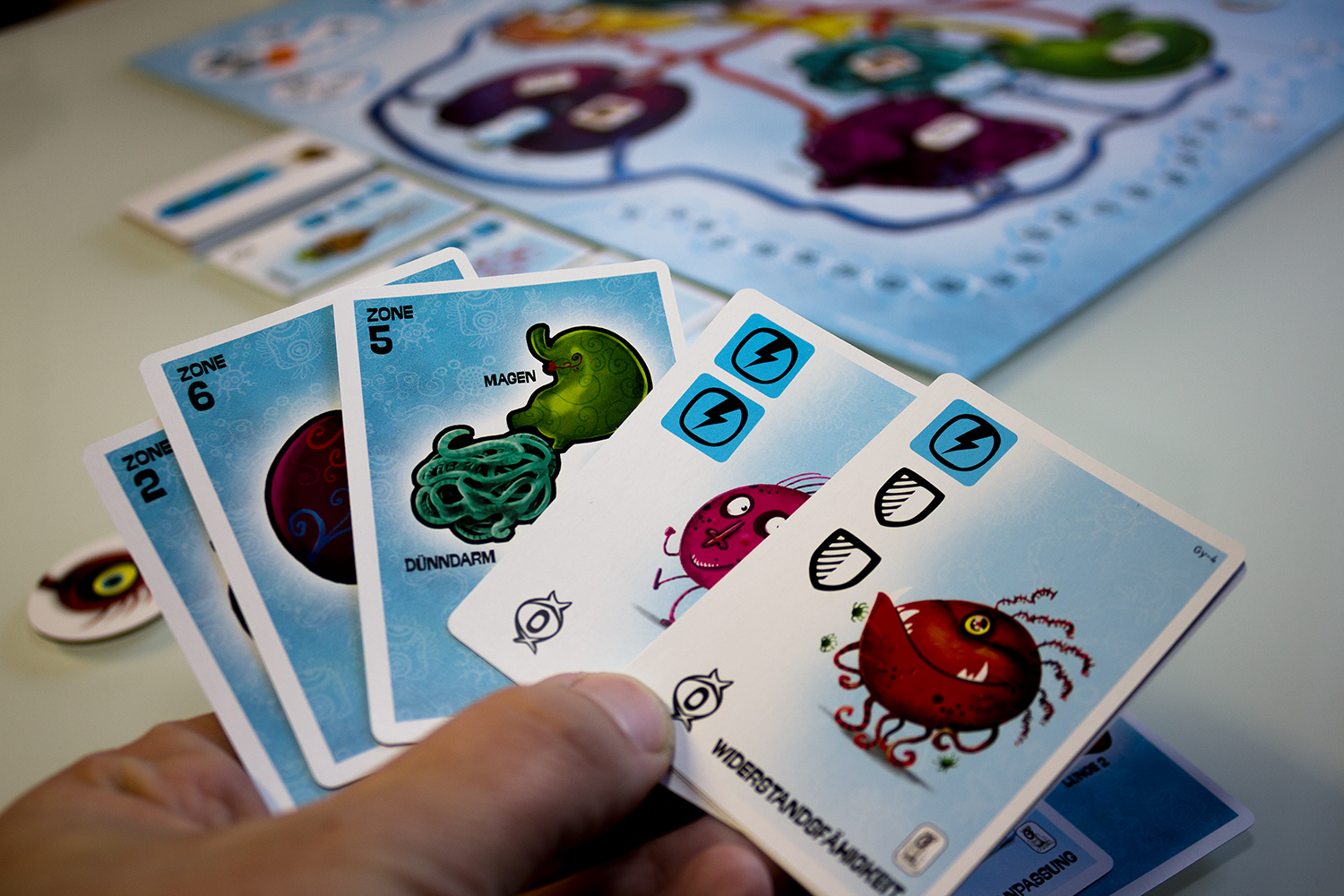 Now it is first seen which player has the majority in which zone. However, to have the majority, a virus of the same species must be present in at least every associated organ. The player receives the victory points according to the point marker there, but also rises accordingly on the research scale. 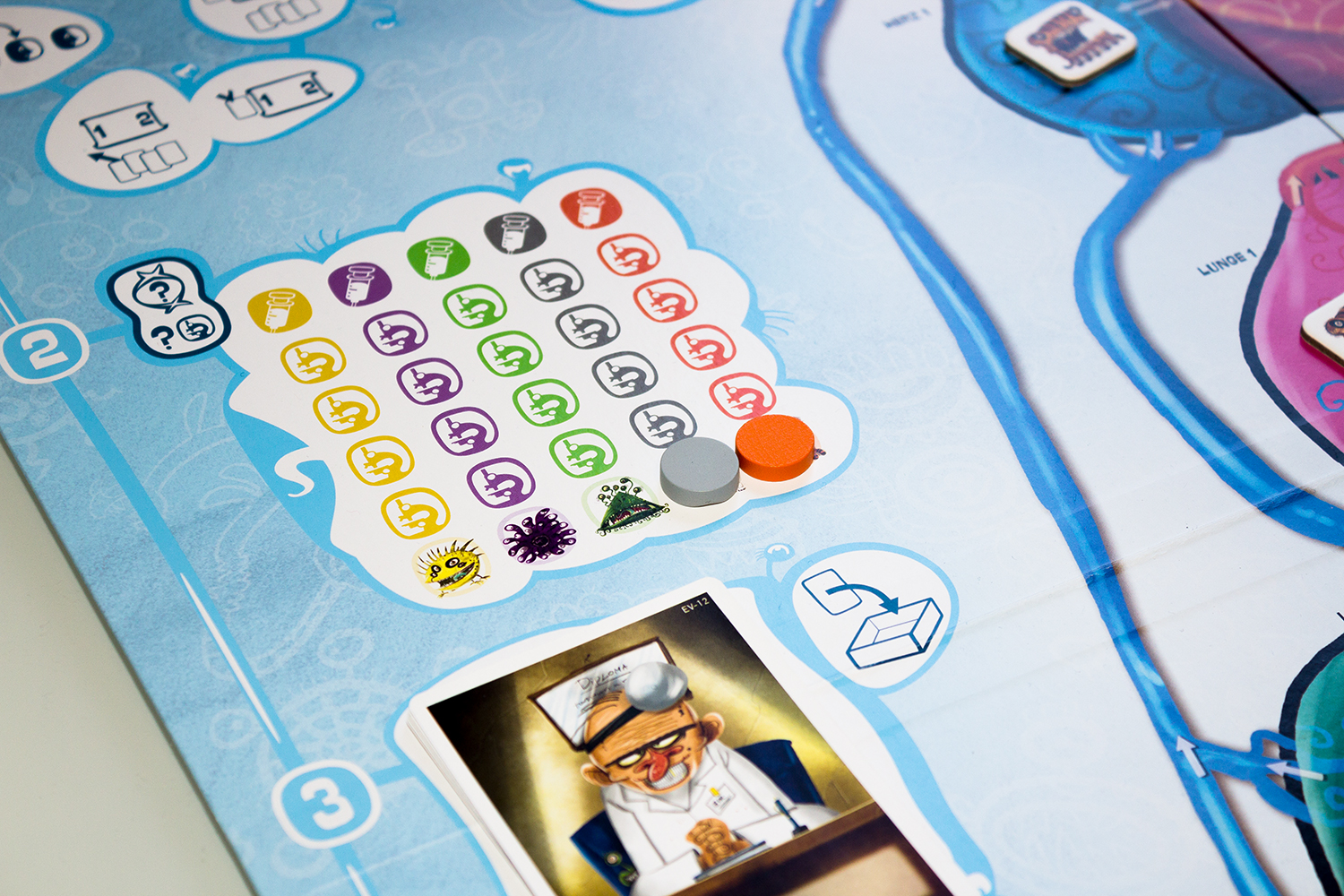 The event card on top is now resolved. The players can get points or disappear from an organ. There are numerous other reactions as well.

The immune system reacts by dealing with the collapse markers in sequence according to their number. Whoever has the most points in a collapsed organ receives 2 victory points. All other players one point. The viruses are now removed without a shield and are returned to the respective player's display. The others are turned over and lose their shield.

If a player has his research status at maximum, then the doctors unfortunately discover an antidote. All viruses that do not show a shield will now disappear from the body. The research status then drops back to zero. 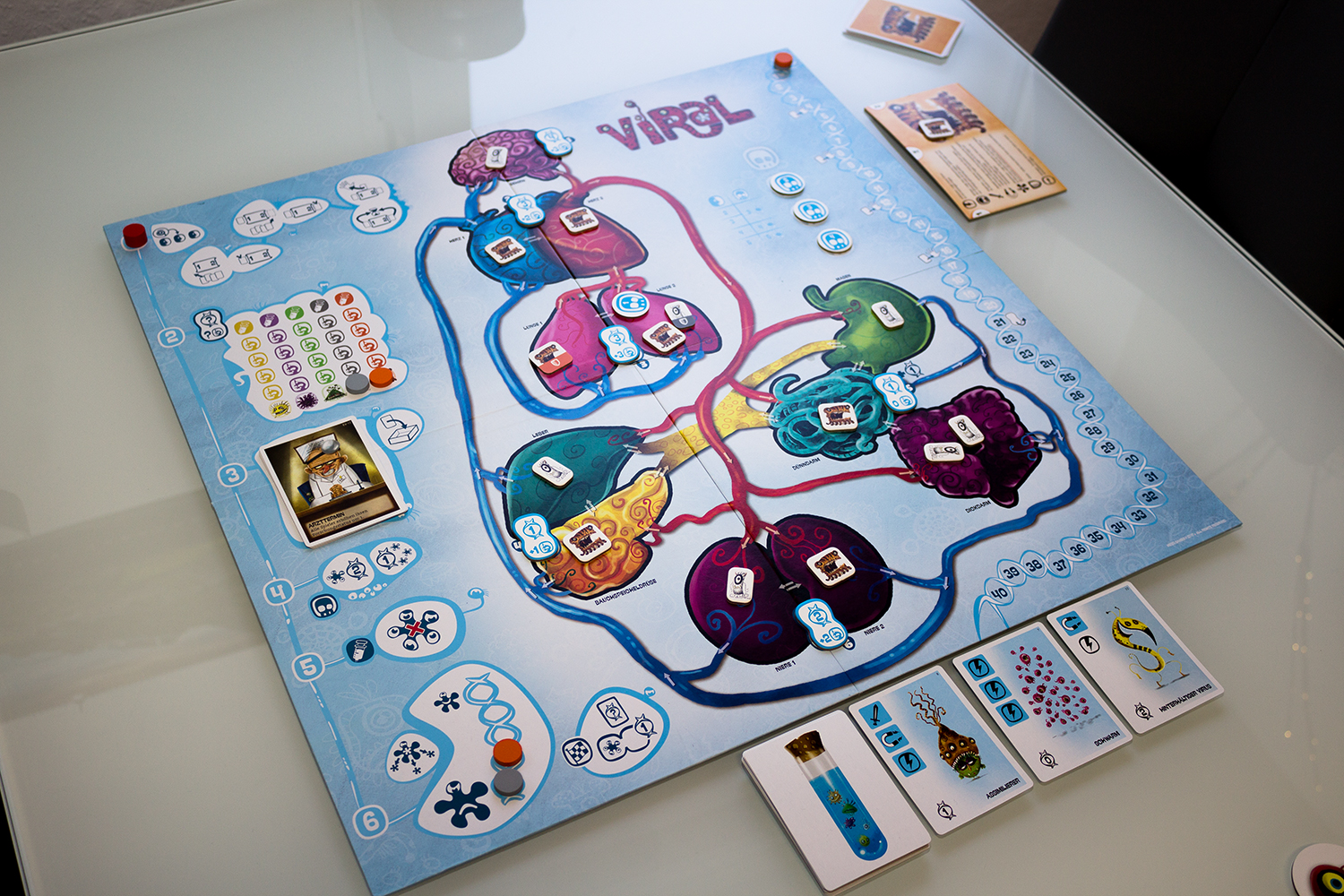 The priority table will now be re-sorted. Whoever is at the very front moves to the very back and so on. This line-up clears ties in the next game. The next round can begin.

Especially in the current time of influenza, it is fun to turn to the other side. Finally not being at the mercy, but hanging around as an annoying virus in your body and collecting recognition for particularly effective distribution. But woe if the doctors come and find an antidote ...

The setting is really funny and has been implemented very well. What is fair is that there are two ways to prevent a player from moving too far away. The rounds play quickly and easily after the first run. The strategic placing or moving of the viruses are exciting during the game and constantly change the balance. Because four cards are not always available in the current round, the game remains dynamic.

This also applies to the points. These are flexibly redistributed every batch. Different sectors always have a different meaning. Here, players have a few games of fun.

If you want to try out a fancy game that is great to play as a family, you should definitely remember Viral. The game is also suitable as a very unusual gift.

Buy the German version for around € 44.

Pictures of the game