How do musicians feel about corporate gigs?

Who needs a CI, and a good one at that? And anyway, what is it actually?

CI stands for "Corporate Identity" and, in a few words, stands for External presentation a company, an association or, as in this case, an artist or a band. It includes "... the entirety of the features that characterize a company and distinguish it from other companies" (as wikipedia describes it).

We would like to take a closer look at the topic at this point and give some tips for bands and musicians on what to consider when creating a CI.

1. What is a "corporate identity"?

Put simply, this is the band's calling card. You want your music to be heard, the records sold and the band booked. To do this, you have to consider the relevant points regarding marketing: Before you start writing a press release or an info sheet, you have to do it the basic direction of the band in a form that suits everyone.

It should also be noted that everyone who founds a new company, an association or a political party has to deal with the issue of public image. Because the aim is to convey the most appealing image possible, which should draw the attention of potential interested parties.

You are a couple of musicians who know what music they want to make. The band name is already there and maybe the first own songs are already there. This laid the foundation stone. Now it is time to take the second step:

The existing and promising ingredients must become one coherent overall concept summarized which concert promoter and potential fans equally appeals. That brings us to the target group.

3. Who are you doing this for?

First and foremost for yourself. Whatever you have set yourself as goals with your musical project, what you personally like is always important. Even more, you have to identify yourself (hopefully for many years) with your music.

The spark should jump over to the people. But exactly this one Spark must blaze in you to then kindle an inner fire for your music. If you cannot convince yourself, it may not work in a larger environment.

But the question remains, how exactly should the spark jump over? Here, too, part of the answer is: "Corporate Identity".

Take notes, record your ideas and collect them. Whether the outfit goes with the music or the language with the lyrics is of secondary importance. First of all, a colorful one Potpourri of ideas to collect.

I personally send an interview to the musicians in a band who would like to work with me. A good two dozen questions that deal with the individual musician himself and from which I get one or the other brilliant idea that is sometimes provided quite unconsciously because someone is looking at the band from "outside". Ask for feedback and take criticism seriously!

5. Logically you need a logo

If you can decipher the logo of a black metal band or a brutal death metal band, then it's not good enough. Everyone who deals with these extreme styles of music knows the lettering of such bands. If I can't decipher the band name, two things can happen:

On the one hand, I lose interest if, with the best will in the world, I can't recognize the band name. But then I don't belong to the selected target group either. But if curiosity wins and I won't give up until I can find out more about the band, then the concept has already worked.

Conclusions about the music on offer can also easily be drawn from the retro bands:

In the style of the seventies, bands such as Blues Pills (cover picture) have concentrated on curved, colorful graphics that put the band name in the limelight in a visually impressive way. Generally the colors. Not everything in this world is black and white! A very specific, individual color tone is often more impressive than a lettering that has been worked out down to the last detail. 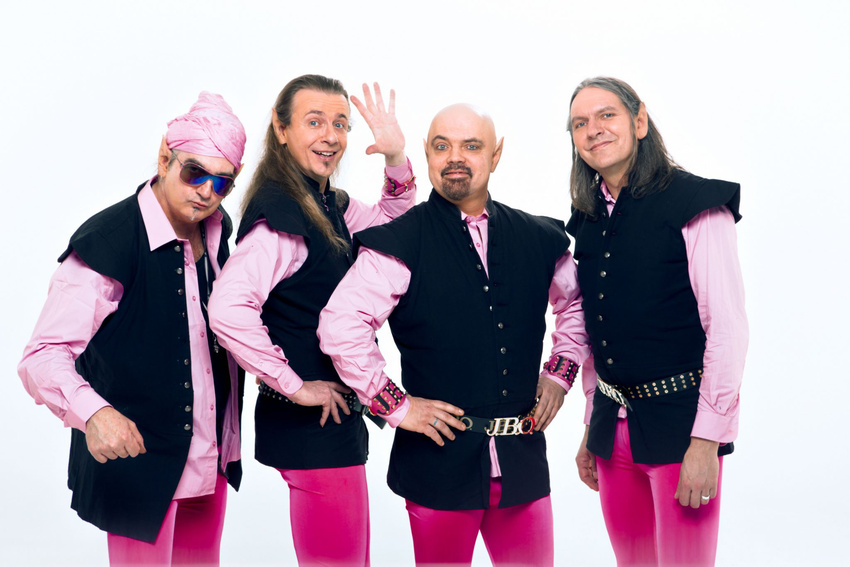 Tip: Just try the color palette on the computer to see what certain color nuances can do for the eye of the beholder. Let's take J.B.O .: Dedicated to stupid metal from the beginning, the Erlangen-based company scores above all with the use of the color pink. And success proves the boys are right, a CI par excellence.

Let's stay with J.B.O .: The interplay of the different pink / black hues is not the only unique selling point of the band. It may have been forgotten by now, but the acronym stands for "James Blast Orchestra". For this, the band received a warning at the beginning of their career and has been using the abbreviation ever since. In principle, the four of them did a lot right, plus the concept of covering songs from all branches of popular music (from Slayer to Nena) and adding funny German lyrics. J.B.O. initially brought regional success, but the reputation spread at lightning speed, and commercial success was not long in coming.

Who knows what would have become of this band if one of the factors mentioned hadn't worked out in this way.

To summarize again: It applies a uniform overall picture from all components to create.

Of course, it starts with the actual idea, with the lyrics and the music. The visual appearance is first built on this foundation. Hairstyles and clothing may be the most important topics, but it is also about things like expressions, facial expressions, general body language. You have to question that before you go to a (hopefully not entirely cheap) photographer.

The next point includes the so-called performance. How do you move on stage? Is there a distribution of roles? Is it planned that the musicians will use artist names and how do they fit in with the stylistic orientation? Are announcements rehearsed (keyword entertainment)?

At the same time, a logo, a color assignment and at least a solid website should be planned. Very important: Place contact details in such a way that people who are interested in your band are informed as quickly and clearly as possible who they should contact.

In principle, the CI can also be imagined as a puzzle, in which all parts fit together in the right places and in the end it results in a coherent overall picture.

"Who are we and how do we show it to humanity?" - Have you already answered this question for yourselves?