What is being mined in Canada

"The water is so polluted that we can no longer drink from the streams and fountains," says Violet Cheecham Clarke. The 85-year-old is one of the elders of the indigenous people of Fort McMurray with tribe number 468 in Alberta, Canada. "We can no longer even give it to the animals to drink," she says.

The sprightly old lady with the dark gray hair has been around the world a lot, she also lived in Germany for several years. She fights to ensure that the oil production does not pollute the water - often in vain, as she says: "I've been to many meetings that were about water, but somehow we never get ahead." They have had to buy drinking water for many years; it is delivered once or twice a week. 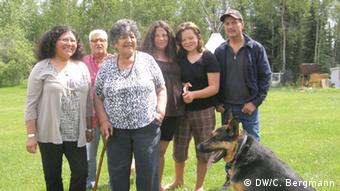 The Cheecham family is concerned about the environmental impact

They are depressed, says Violet Cheecham Clarke, about how the natives are treated: "fenced in like animals, just supplied with essentials, happy with a few bottles of beer". The tribe has 195 members, says Violet, and many live in trailers. Because not all members of the five Native American tribes in Alberta benefit from the oil sands that made Fort McMurray, only half an hour's drive away, rich. Corruption is ubiquitous, it is said, and some indigenous people are well paid to work with the oil companies.

Oil sands mining in Alberta began in 1967. The ground in northwest Canada is saturated with black gold. However, it took several decades to develop a technique to profitably separate the oil from the ground. Because the yield is low, the oil content is only around ten percent. The oil is usually heated and liquefied by introducing steam through underground pipes, or the earth is removed with giant shovel excavators and then washed, as in open-cast mining. For both you need one thing above all else: lots of water. It comes from the Athabasca River here in Alberta. In 2011 it was 112 million cubic meters, according to the oil industry.

But while the wastewater from households is collected, cleaned and recycled, this is not possible with the water used for oil production. After the oil has been extracted, what remains is a mixture of water, sand, clay and a bit of bitumen. It is currently stored in large tailings ponds. The area north of Fort McMurray is not only characterized by huge mining heaps, but also by these large areas of toxic water. 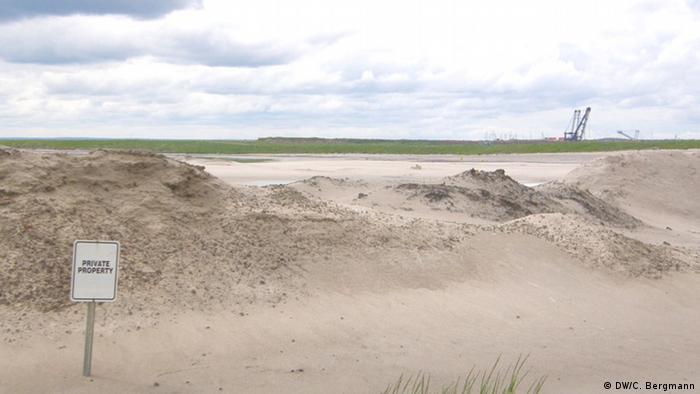 No beach idyll, but what is left over after washing out the oil

"We're making sure the tailings ponds are safe and the industry is working hard to reduce water consumption and get the water out of the sludge faster," said Greg Stringham of the Canadian Association of Petroleum Producers Petroleum producers. All the water in the catch basin is recycled and nothing is released into the natural environment, he assures us. A layer of mud would seal the bottom of the basin and measurements would not have shown any change in river water.

Tony Boschmann doesn't think so. He not only considers the official water consumption values ​​- 2.7 barrels of fresh water for one barrel of oil - to be too low. At one point on the Athabasca River, he noted a peculiarity in the groundwater: "The chemical composition of the water that penetrated the river floor was completely different from the water that was in the river." The conclusion is obvious, he says, that it was contaminated water. And the alleged cause was in sight: "On the adjacent bank there were tailings ponds over a length of 30 to 40 kilometers." 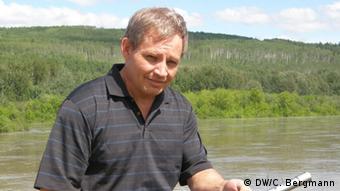 The 53-year-old Boschmann is an expert in hunting down polluters. But the government, he says in frustration, has rarely done anything. Not even in this specific case. "We informed the authorities and we were hoping that they would conduct a full investigation," he says. But nothing happened. There is probably no interest in associating the oil sands with something negative, he said.

John O'Connor is also worried. The doctor has been caring for the people of Fort McKay, a settlement north of Fort McMurray, for 15 years. And he also knows the people in Fort Chipewyan - another settlement that can only be reached by boat, plane or over the ice in winter. There he found increased rates of cancer with tumors in the bile duct from 2003 to 2005. Normal, he says, is one case in 100,000 people. Fort Chipewyan had fewer than 1,200 residents - mostly Aboriginal people - and three cases. "Nobody claims that this rate has anything to do with the tar sands," says the 56-year-old doctor, "but if you look at the individual types of cancer, their number and the toxins that are released into the environment and the food chain through oil breakdown, then many of these toxins can be linked to the cancers. " The authorities are nowhere to be seen: "I am disgusted by the inaction and the lack of interest."

Because Alberta in general and the area around Fort McMurray in particular have benefited from the oil sands, there is no doubt about that, and O'Connor points out that the standard of education is higher than before, life expectancy has increased, and so is the standard of living in general.

However, suspected water pollution is not the only problem with tar sands. CAPP's Greg Stringham admits, "On average, we produce about six to nine percent more greenhouse gases per barrel of oil from oil sands than we do from traditional production." Mike Hudema of Greenpeace Canada says, "Tar sands are the largest and fastest growing single source of emissions in Canada, and the primary reason the Canadian government cannot deliver on its Kyoto Protocol commitments and why we are making international progress on future climate commitments To block."

Graciela Chichilnisky, an economist who worked on the Kyoto Protocol, believes Canada's drive to mine more tar sands to export to China and Europe is the wrong way: "I think Canada is a great country with intelligent people and great ones Technology, and it should drive inventions [in the field of clean energy], "she says. With her company Global Thermostat and the German company BASF, Chichilnisky has developed a system that draws carbon dioxide from the air. Nobody needs a technology that could cause environmental disasters through pipeline leaks and pollute the water, as happened on June 1st in northern Alberta, she says. 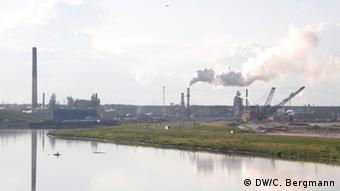 But the mining of Canada's oil sands should continue. Oil company spokesman Greg Stringham explains that 1.8 million barrels a day are currently being extracted on an area of ​​760 square kilometers. That's just over half of Canada's total oil production. 4,800 square kilometers is the area where oil can be found. By 2030, the production volume is therefore to be increased to 6.7 million barrels per day. The new sales market: the refineries and ports on the Gulf of Mexico. The prerequisite for this, however, is the construction of the controversial Keystone XL pipeline, which US President Obama must decide on.