How did the Muenzmarkt itself develop?

Interview with the head of the coin department, Ulrike Bohm

"The German coin market still belongs to the first division"

Ministerialratin Ulrike Bohm, Head of the Coin Department in the Federal Ministry of Finance, explains in an interview with DEUTSCHE MÜNZEN MAGAZIN innovative strategies that are intended to stimulate the German coin market and contribute to the promotion of future generations of collectors.

German Coin Magazine:You have been head of the coin department in the Federal Ministry of Finance for almost nine years. During this time you have probably given more impetus to the collector's coin policy in the Federal Republic of Germany than any of your predecessors. You have expanded the issuing program considerably and introduced numerous innovations such as polymer ring or colored coins and now the “Christmas coin” in fine silver plate embossing. The entire organizational structure for marketing and sales has been turned inside out and for the first time in Germany there is also a large-scale advertising campaign for the hobby of collecting coins: “#Was UnsPetzungen”. In your opinion, how did this affect the collector's market? Was it possible to address new, including younger, sections of the population?

Ministerialrat Ulrike Bohm: Thank you very much for the laurels, which I am happy to pass on to the “teammates” involved. Because, it's like team sport: coaches don't score goals! Success is only achieved when the motivation, competence and willingness of everyone involved to advance something. That was especially the case in the last few years. In this respect, the praise goes to the coin team in the Federal Ministry of Finance and the Bundesbank, the team in the Federal Administration Office and the five minting companies in Germany.
As the publisher of German commemorative coins, we work hard every year to offer collectors an attractive program.
The development of the output program is a constant process in which we want to thematically capture the spirit of the times and try out technical improvements, such as new materials or new embossing techniques. Much has been achieved in this way in recent years. Of course, the issue of the 5 euro coin “Planet Earth” in 2016 was a particular highlight. The world's first three-component coin with a polymer ring undoubtedly contributed to bringing the topic of coin collecting into the public eye. It is important to develop this interest.
In addition to attractive products, this requires efficient marketing and sales structures. We took an important step at the beginning of 2020 with the introduction of the “Münze Deutschland” brand. A fresh appearance and a contemporary online presence are especially important for the younger generation in order to reach them. That this approach can be successful was proven by the # WasUnsPracht campaign, in which young people in particular applied to become the “face of the German Mint”.
However, there is generally great interest in German coins and the German coin market is still in the first division on an international scale.

DMM:Our last interview two and a half years ago was about the first 10 euro coin with a polymer ring. Today the three-part series “Air Moves” has already been completed. But it will be continued from 2022 with the new topic “In the service of society”. Is this motto owed to the Corona crisis, should it be used to numismatically honor the “heroes of everyday life”?

Bohm: The German collector coins are an expression of the historical, cultural and socio-political self-image of our country. The series “In the service of society” focuses on the special importance of professional groups that are indispensable for the functioning of our society and the life of each individual. We had already considered the topic in 2019, because regardless of the pandemic, the employees in these professions are doing great things. As a result of the coronavirus pandemic, they have increasingly come into the public eye, as the relevance of their work has become particularly visible to us all. The series, which will begin in 2022, is an expression of the respect and appreciation of those who always act in the interests of the common good.

DMM:Will there be different colored metal components with transparent rings again or this time colored rings, as in “Earth's climatic zones”?

Bohm: The coins in the new 10 euro series are given a colored ring. The polymer rings will be based on the characteristic colors of the respective occupational group.

DMM:The successful series of 5 euro polymer ring coins with the legendary pioneer “Blue Planet Earth” will be replaced in 2022 by a 5 euro series with “attractive color printing”, as it is called. Why this new specification?

Bohm: There has not yet been a series with color printing in the Federal Republic of Germany, now is the time.
The theme “Wonder World of Insects” is particularly suitable for the color scheme. We want to appeal to children and young people in particular with the colorful insect motifs. Due to the purchase price, these coins are also an ideal gift for birthdays and other occasions.
At this point I would like to draw your attention again to an important aspect of the “coin” as a gem: every coin is a small work of art. Developed in competition among sculptors and graphic designers and characterized by the highest technical quality. So, great quality for little money.

DMM:Are only reliefs colored or (also) the flat surface of the coin “photo-realistic” printed?

Bohm: With the new 5 euro series, motifs with color gradients are also conceivable. This opens up completely new design possibilities for the artists. I am already looking forward to the drafts that will be submitted.

DMM: New techniques are being used here - no longer (only) the pad printing previously used for the 20 euro commemorative coins, and there are plans to have these coins manufactured in all five mints (A, D, F, G, J) ?

Bohm: New techniques are used, which are also used by different mints. Unfortunately, we cannot reveal any more at this point in time.

DMM:Have you already decided on the individual motifs as part of the planned “Wonder World of Insects”?

Bohm: At the start of the series, a coin with an overarching motif on the topic will appear at the end of 2022 with the “Insect Kingdom” issue. A coin should then follow each quarter for a specific insect. The animals are selected in close coordination with experts in the field of entomology. Because in addition to the feasibility, we have the right to carefully select the subject matter from a scientific point of view. Which insects we will ultimately produce will be announced by the start of series production in autumn 2022 at the latest.

DMM:In 2022, the longest coin series in Germany to date after 17 issues ends with the 2-euro series “Federal States”. Will there be a successor program from 2023 and if so, on what topic?

Bohm: The 17 motifs of the federal state series were not nearly enough to give the many special places in our country a podium. The 2 euro coins are legal tender throughout the euro area and are less than several hundred million every day
Europeans in circulation. We have therefore decided to continue the numismatic journey through the Federal Republic of Germany and, from 2023, to highlight the regional characteristics of the countries in their very specific, recognizable form with a new 2-euro series. As with the current series, the selection of the motifs is made by the respective countries themselves.

DMM:The gold coin programs for 50 and 100 euros will also expire next year. Should both be continued with new topics in 2023?

Bohm: The 50 and 100 euro gold coins belong to the premium segment of the coin collection of the Mint Germany. That is why we will be issuing gold coins with both denominations on new topics in 2023 as well. Especially in the current pandemic and the numerous digital currents, the interest in such tangible real values ​​is clearly noticeable.
Mr. Erzinger, thank you for the interesting questions.

DMM: Thank you for taking the time for this in-depth interview. 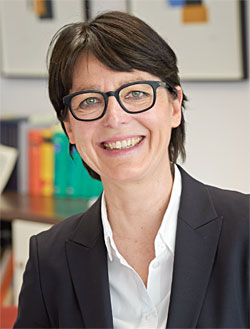