What weapons did the cave man use?

Man not only used weapons for hunting, but also against "his own kind" - how could it be otherwise ...

There is a lot of evidence of human aggression as early as the Stone Age. B. Attacks by opposing groups of hunters shown. In Thalheim near Heilbronn, a 7000 year old mass grave was found with 34 villagers who were violently killed. Also in Eulau near Naumburg 13 dead were found who were killed. The most famous murdered man of the Stone Age is probably Ötzi, who was fatally hit by an arrow shot from behind. 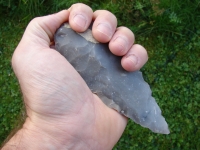 were probably rarely used as close combat weapons, but used in a "refined" form as spearheads. 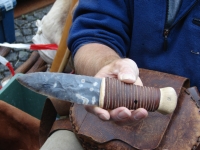 Chopped and retouched accordingly, "typical" knife shapes were created from hand axes, with and without a wooden handle. The forerunner of the serrated edge was also known in the Stone Age. 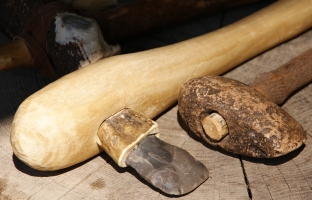 Axes were made from tough wood, pieces of antler and more or less elaborately worked stones. This means that even large trees can be felled with ease.

The "young" Ötzi already had a copper hatchet with him, which back then was more of a badge of rank.

In Schöningen (see below), sharpened throwing sticks that were suitable for hunting small game were also found. The whirling wood could either injure the animal from the impact or pierce it with the tips. 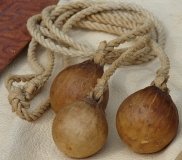 Bola and slingshot have not yet been clearly documented for the Stone Age. Both were highly effective hunting devices. The "inconspicuous" slingshot was also feared well into the Middle Ages as a long-range weapon with devastating effects - today it is almost forgotten ...

The boomerang is by no means an invention of the Australian Aborigines. An ivory throwing device that was around 20,000 years old was found in the Polish Carpathians. There are more recent finds made of wood from Denmark and Switzerland. It is believed that it was primarily used to hunt birds and small mammals. 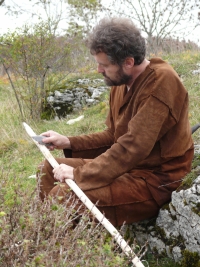 The currently oldest surviving wooden spears (from Schöningen / Lower Saxony) are estimated to be 400,000 years old. They weren't just "broken from the tree", but carefully selected, worked on and balanced. In their flight performance they are comparable to modern competition javelins. Once again our image of primitive Stone Age man was thrown upside down. Certainly not for the last time ... 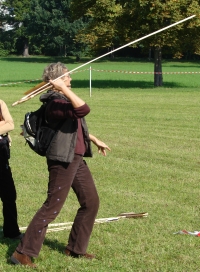 How did you come up with it back then? The spear thrower with its extended lever arm is physics in its purest form. It was mankind's first long-range weapon, an experienced hunter (and he had to practice a lot!) Could hit targets at a distance of 80 - 100 m with it. Quite a few slingshots were decorated with elaborate carvings. The oldest finds are currently estimated to be 20,000 years old. 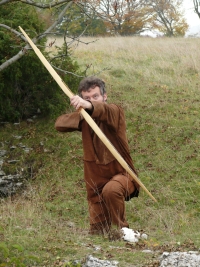 The oldest clear arch find in Europe so far is around 8000 years old and comes from Holmegaard in Denmark. Technologically, this hunting bow is so complex that it must have had a predecessor. Arrows that are around 10,000 years old (Stellmoor near Hamburg) and a questionable remnant of a bow near Mannheim, believed to be 17,600 years old, have also been found.

In our demonstrations we use a replica of the Holmegaard type, with which shooting ranges of over 130 m can be achieved (caution: archery is highly addictive!). 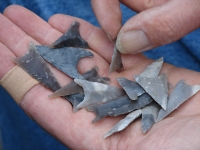 And despite all their skills: the ice age hunters would not have been able to cope with this high-tech army: 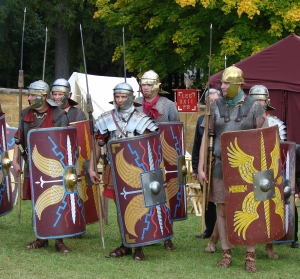