What are the disadvantages of DSBSC modulation 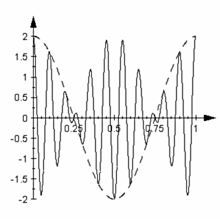 Amplitude modulation without a carrier

The benefit of carrier suppression is that a larger proportion (up to two thirds) of the transmission power can be saved. A further increase in efficiency is achieved with the single sideband modulation (SSB) by bringing not two, but only one sideband for transmission.

The AM with suppressed carrier can be generated with the help of a filter, whereby it is difficult to build a correspondingly steep filter in order not to attenuate the sidebands. In general, a symmetrical, multiplying mixer (ring modulator, double push-pull modulator) is therefore used, which only contains the modulated signal (the sidebands) at the output, but not the carrier.

However, the carrier is required for demodulation; in contrast to single sideband modulation, it must again be available in the receiver with precise frequency and phase. This can be done, for example, by transmission on a separate channel or with the help of a pilot tone. This effort is a disadvantage of this modulation method.

A DSBSC is shown in the picture. The carrier has ten times the signal frequency (dashed line), in the modulated signal (solid line) only the upper and lower "side oscillation" are present.

You can see from the picture that envelope demodulation is no longer possible because the envelope differs significantly from the original signal. The DSBSC is demodulated with the mixer, whereby the carrier must be supplied.

The amplitude modulation with suppressed carrier is used to process the VHF stereo sound. In addition to the actual sum signal from the left and right channel in the low-pass range, a further difference signal from the left and right channel is double sideband modulated onto a subcarrier, in which the subcarrier disappears. Only with this signal, consisting of the sum signal and the two sidebands of the difference signal, is the actual carrier FM-modulated and broadcast.