How many lighthouses are still working

A life for the lighthouse

Clean, wait, always ready so that the lights don't go out. Anne Herzig tells about the everyday life of the last lighthouse keepers.

"It really wasn't as romantic as many people imagine life as a lighthouse keeper to be," says Anne Herzig. The old lady leans forward in her chair. "It was usually hard work and when we had a storm it was also a scary game." Anne Herzig (* 1928, † 2013) is the widow of the last lighthouse keeper at Krautsand and was herself an auxiliary lighthouse keeper before she retired in 1982 after 25 years of service. She is possibly the last witness from this past time. 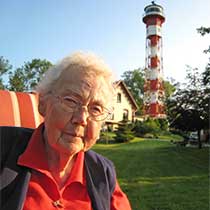 The red and white towers still guide the ships safely along the Elbe, but the lights have been electronically controlled by the traffic control center in Brunsbüttel since the late 1970s. Modern technology also makes it possible for 35-watt halogen headlights to do what previously balloon-sized lightbulbs and even before kerosene and gas lamps did.

In 1956, her husband, who went to sea as a cook before the war, started at the lighthouse in Bützfleth near Stade. It was not until 1955 that he came home from Russian captivity and married Anne from Hetlingen, who was 20 years his junior. The lighthouse keeper couple had three children in quick succession. "The two youngest were born in the tower in Bützfleth. The son was flooded, and our daughter was born there was black ice," says Anne Herzig. She is still one of those who was tough. At that time, she was 1.80 meters tall, a stately woman who could grab hold of. 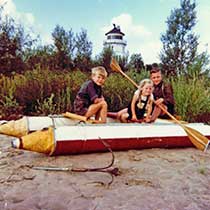 Hard work for lighthouse keepers, adventure playground for the kids

The family of five was then transferred to Krautsand in 1960. At first they lived in the now demolished tower of the lower fire, from 1966 in the small house with a garden next to the 35 meter high tower of the upper fire.

In the lower fire there was only one living room on each of three floors, and above that was the work area that no one except the guards were allowed to enter: a guard room and the lamp room. For the young mother, life in the tower meant constant up and down stairs. "Heating up the coal stove on every floor - that alone was a few hours of work," she recalls.

The lighthouse keeper and his wife were responsible for the scheduled maintenance of five fires on the left bank of the Elbe: for the top and bottom lights on Krautsand, for top and bottom lights in Asseler Sand, for the fire at the entrance to Wischhafener Sand and for the engine house with a diesel generator on a farm. 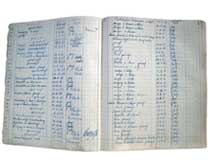 Work on the lighthouse had to be entered in the logbook.

So that the light was always bright enough, we had to keep the lenses and the windows in the lamp rooms clean. The flies made a lot of dirt, and it was also dusty, "says Herzig." My husband was very putty when it came to cleaning. And cleaning the Fresnel lenses, which were definitely a meter high, then took it. "Also keeping the 136 wooden steps of the narrow spiral staircase in the tower clean was quite a drudgery. Broken light bulbs had to be replaced, liquid gas lamps had to be refilled. In general The maintenance work required manual skill. “If everything was well cared for, it wouldn't break down so quickly.” Kurt Herzig was ambitious.

"The tower wobbled tremendously in a storm, it could have a half-meter deflection."

And nothing was more life-threatening in shipping than when the lights went out during storms and floods. "In a storm it was always scary, it howled and the steel tower wobbled tremendously, it could have a half-meter deflection." It was not uncommon for the lamps to fall out. Her husband had to be at the bottom fire in tricky situations, a good one kilometer away, while Anne Herzig held the position at the top fire. Both lights together form a leading light line down the Elbe. Sometimes she drove him down on the moped during a thundering hurricane. "It was a nerve strain. Floods only ever happened in the evenings, thank God the children mostly slept."

Lighthouses were also often used as observation posts for weather services. That was not the case in Krautsand, but Anne Herzig has reported the water levels of the Elbe for decades, sometimes the thickness of the ice, and once a month has replaced the drum with the recordings of the ebb and flow.

Over the years, Anne and Kurt Herzig have coped with work and family together. "My husband was responsible for the beacon during the day, I at night." In the beginning, she received 80 marks a month for being on call at night. They did not feel lonely, "but a bit left out," says the humble old lady. "When the sun went down in the evening, in winter it was pretty early, then we had to be at home. We couldn't celebrate together in the village."

The family has cultivated a large garden around the small house on the Oberfeuer just behind the dike. With turkeys, chickens, pigs, has grown potatoes and vegetables, planted fruit trees. As a small employee at the Hamburg Waterways and Shipping Office, that was an important extra income.

Today the lighthouse (1907) is a listed building and Herzig's daughter lives in the house. Anne Herzig retired to an apartment in Drochtersen after a fractured pelvis. She misses the view of passing ships and the rush of the water very much.

History The history of the Krautsander lighthouses

Text by Ruth Kastner, published in the Hamburger Abendblatt on June 13, 2009