What is a growing small business

Gazelle company: the recipe for success for fast growing companies

So-called gazelle companies are growing faster than others - but why? Researchers have now investigated this question. Your answer: The gazelles' recipe for success has two ingredients.

Science calls gazelles companies that grow rapidly in a short period of time - probably because they are so fast in the market. Gazelle companies have at least ten employees and manage to increase their sales and / or their number of employees by an average of more than 20 percent per year for three years in a row. Every entrepreneur would like to tell such a success story. In order for your wish to come true, it is worth taking a closer look at the success strategies of other companies.

So what are the characteristics of the gazelles? The Institut für Mittelstandsforschung (IfM) Bonn pursued this question: For the study "Fast growing companies in Germany: characteristics and determinants of their growth" the researchers surveyed companies nationwide with at least ten employees.

What are the characteristics of German gazelle companies?

Company age: Fast growing companies are much younger than slower growing ones: Gazelles were founded an average of 19.8 years ago, their counterparts - let's call them snails - 42.5 years ago.

Company size: Small companies grow faster than larger ones: the gazelles had an average of 155 employees, the snails 321.

Economic sector: There are significantly more manufacturing companies among the gazelles than service providers, for example.

Why are the gazelle companies growing so fast?

Second, how fast a company grows depends on the company's goals. According to the study, a sustainable corporate policy seems to be difficult to reconcile with rapid growth: companies that pursue goals such as ecological sustainability or social commitment belong less often to the group of gazelle companies than those that pursue purely commercial goals - such as long-term increase in company value .

Companies that were solely out to maximize profits, however, were also unable to achieve gazelle-fast growth. Even if it may sound like a paradox: If you want to grow quickly, you shouldn't just look at the fast euro, but think long-term. 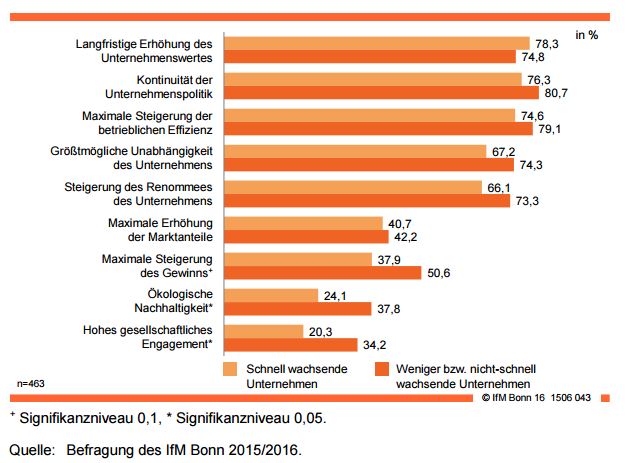