Wanted to be related to Barack Obama

Not just honeymoon: Obama and Europe

It began in the summer of 2008 as a great celebration of love at the Berlin Victory Column. Germans and Europeans cheered the man who won hearts with his slogan "Yes we can". Nobody knew exactly what the campaigner Barack Obama could do, but he spread optimism and, above all, represented a refreshing contrast to the then incumbent George W. Bush. With his policy of intervention in Iraq, he had divided Europe. Now one hoped for someone who could unite.

In Prague in spring 2009, shortly after taking office, President Obama promised to work for a world without nuclear weapons. With a few exceptions, the Europeans were enthusiastic. In another speech in Cairo, he promised to want to build a new relationship with the Arab world. In the same year, the man who drove the US withdrawal from Afghanistan and Iraq received the Nobel Peace Prize. In one of the many farewell interviews Barack Obama recently joked on a talk show: "I don't really know why I got the award." It was advance praise that, in the eyes of many Europeans, had turned out to be premature. 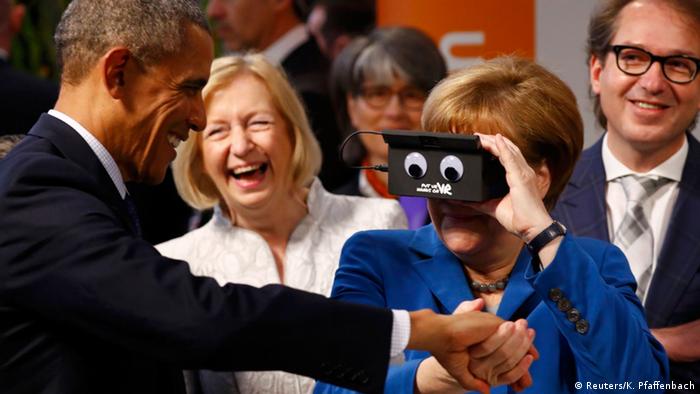 They didn't always have as much fun as they did at the Hannover Messe 2016: Obama (left) and Merkel (with glasses)

Greatest performance of the "free riders"

Europe recovered much more slowly than the US from the global financial crisis that was triggered by the bankruptcy of a US bank. The euro and sovereign debt crisis rocked the EU to the core, followed by the Ukraine crisis and the refugee crisis of recent years. From Obama's point of view, the EU has become increasingly incapable and unwilling to act. In an interview with the magazine "The Atlantic" in April 2016, the President described the European allies as free riders who claim American services and leadership but are not prepared to show solidarity or increase their military spending themselves. In the same month, however, Obama also urged the Europeans at the Hanover Fair not to let their courage sink and to fight their own crises. "Europe is one of the greatest political achievements of modern times," he says as someone who comes from outside and has to remind Europeans what to preserve. There was once again the feeling of the Obama of 2008, who took his courageous "Yes we can" against the "European fear". 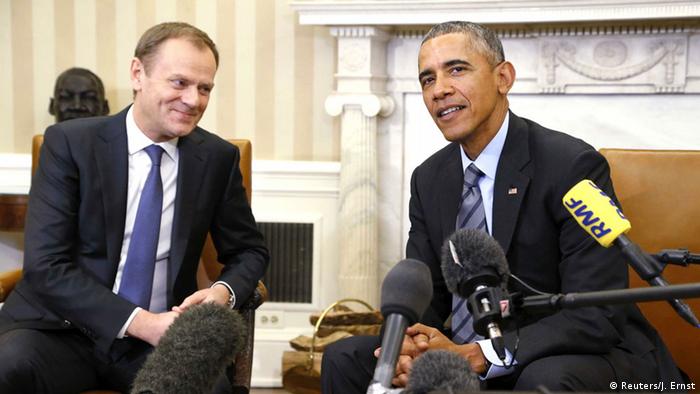 A guest in the White House, but no longer in focus: EU Council President Donald Tusk (left) (2015)

In between, however, the Europeans had serious doubts about how seriously Barack Obama meant his cooperation with Europe. He wanted to make Asia the focal point of his foreign policy. That only worked to a limited extent. During the intervention in Libya, he relied too much on France and Great Britain shouldering their responsibilities, the outgoing president admits today. He was also disappointed with allies from the Middle East, such as the Saudis. Elmar Brok, an experienced foreign politician in the European Parliament, drew a sober balance after the first four years of Obama's cautious foreign policy. "There is a good relationship at the working level. But the EU and the USA have not yet been able to set strategic accents that would lead Europeans and Americans to work more closely together in this world that is changing in terms of economic and power politics," Brok told Deutsche Welle in 2012 .

The low point of the relationship was, at least from a German point of view, the wiretapping affair surrounding the US secret service NSA. Not only were all Europeans spied on across the board, the NSA did not even stop at Angela Merkel's private cell phone. Embarrassing. Obama only assessed the Chancellor as a real European leader, according to the White House.

It was not until the Ukraine crisis, provoked by Russia, that the transatlantic community welded together again. Obama and the EU did not always act in sync in their crackdown on Moscow, but in the end they were somewhat united. Obama has made no great secret of his frustration with the long European decision-making processes and the often divided EU states. This view culminated in the statement made by State Secretary in the Foreign Ministry, Victoria Nuland, at the height of the Ukraine crisis: "Fuck the EU". Forget the Europeans, who will never agree anyway!

Nevertheless, Obama left no doubt about his loyalty to the transatlantic alliance. At several NATO summits, he assured the eastern member states of support in the event of Russian aggression. New, albeit small, associations are being relocated to the Baltic States, Poland, Romania and Bulgaria. Under Obama, the US increased its defense spending for Europe. Finally, after ten years of tough negotiations, the US and the EU reached the deal with Iran to end the nuclear weapons program. The attempt to negotiate a free trade agreement (TTIP) has failed. The US had simply not moved enough, complained the chairman of the trade committee in the European Parliament, Bernd Lange, in an interview with DW. But the TPP trade agreement is also not signed with Asia. The American Senate has not yet ratified it. 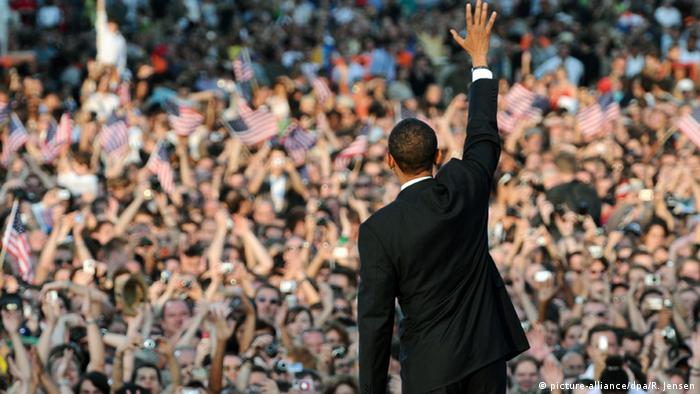 Triumph even before the 2008 election: Obama at the victory column

"The era is over"

The leader of the Liberals in the European Parliament, Guy Verhofstadt, believes that the Europeans will sorely miss Obama. With the election of Donald Trump, the US would only concern itself with itself and TTIP would be dead: "If the Americans intervened internationally, as in Iraq, Europe responded with moral lectures about imperial overstretching. If the Americans don't, or too late, or did not intervene sufficiently, as in Libya or Syria, the Europeans have demanded more leadership from the US. " Verhofstadt believes that this comfortable dynamic of transatlantic relations is now over. Not only is the Obama era over with Trump. Europe now has to solve its problems itself and can no longer rely on the USA.