How is tar made

Tar and pitch made from wood are the oldest plastics in human history. Tar extraction was known as early as the Mesolithic. Wood tar was used as an adhesive and to seal the planks of wooden ships.

In the pre-industrial era, charcoal and tar were indispensable in handicrafts, trades and households. A lot of charcoal was needed, especially for smelting the iron ore, as it was used to reach the temperatures at which the iron could be melted out of the ore. The wooden power transmission of the hammer mills, in which the extracted iron was forged, was lubricated with a mixture of wood tar, linseed oil and animal fat.

When the horse-drawn farm and traveling wagons still had wooden axles, the "tar hips" in which the lubricant was located hung under the rear axle.

Medicines to which charcoal or wood tar were added were and are also used in human and veterinary medicine. Wood tar is still used today as a disinfectant for hoofing and hoof trimming. 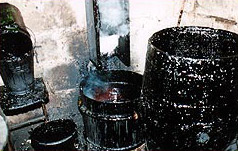 When hard coal began to be extracted industrially and crude oil began in the middle of the 19th century, the old craft of charcoal burners and tar burners was heralded. In addition, sailing ships, which required wood tar, were replaced by iron and steel steamers. In addition, the raw material wood was becoming increasingly scarce.

But charcoal is still needed and used today, for example as a reducing agent in metallurgy and for the production of activated charcoal. And charcoal is also indispensable for barbecuing. 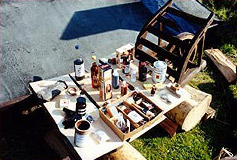 Wood tar and wood tar products can still be found today mainly in the Nordic countries, especially in Finland. In addition to being used for impregnation and as a protective coating, there are numerous products with additives of wood tar or tar aromas such as tar soap, shampoo, sauna infusions, mosquito repellent ointment and even tar confectionery.

Today, of course, the interesting question is how charcoal, wood tar and other by-products were and are produced in the past and still today.

Everything happened through the thermal transformation of the wood, through the wood charring (pyrolysis). The best known is the kiln for the production of charcoal. Pits, the double-pot method and later the tar ovens were used for tar extraction. In the course of the centuries, a large number of different processes were developed.

However, depending on the objective of the respective wood charring (charcoal or tar or charcoal and tar and other by-products, etc.), one can distinguish between two main types:

With the autothermal process there is no separation between reaction wood and firewood. This includes the kiln, the tar pits, the ditch or slope kiln or the kiln kiln (single-chamber kiln).

In the allothermal process, reaction wood and firewood are separated from each other. To be mentioned here are the double-pot method, the two-chamber furnace (Wiethagen) and the retort.

Resin-rich pine wood is particularly suitable as a starting material for tar production. It was obtained primarily from the roots (stumps) of old trees. In the Slavic countries, the birch tree was mainly used. Beech provides good charcoal.

At the Forst- und Köhlerhof Rostock-Wiethagen you will not only find the historical tar ovens (two-chamber ovens) from 1837, but in a model park there are originals and models of the most important wood charring plants from Central Europe.