The universe works as a cell

Current results of the Kilo-Degree Survey have shown that matter in the universe is about ten percent more evenly distributed than predicted by the standard model of cosmology. An international team, led by astronomers from the Netherlands, Scotland, England and Germany - with the participation of the Ruhr-Universität Bochum - describes the results in five articles, three of which were published on a preprint server on July 31, 2020. They are also submitted for publication in the journal Astronomy and Astrophysics.

The data were recorded with the Very Large Telescope Survey Telescope (VST) of the European Southern Observatory on Cerro Paranal in northern Chile. The resulting sky map covers five percent of the extragalactic sky and includes 31 million galaxies, all of which were included in the analysis. They are up to ten billion light years away, their light was emitted when the universe was only around a quarter as old as it is today.

The tendency of matter to clump is determined

Using the galaxies, the research consortium created a map showing the distribution of matter in the universe. To do this, the scientists used the so-called weak gravitational lensing effect: the light from distant galaxies is deflected and distorted on the way to Earth by the gravitational effect of large accumulations of matter such as galaxy clusters. Based on this effect, the tendency of matter to clump can be determined - namely of visible matter, gases and invisible dark matter, which makes up about 85 percent of the total matter in the universe. 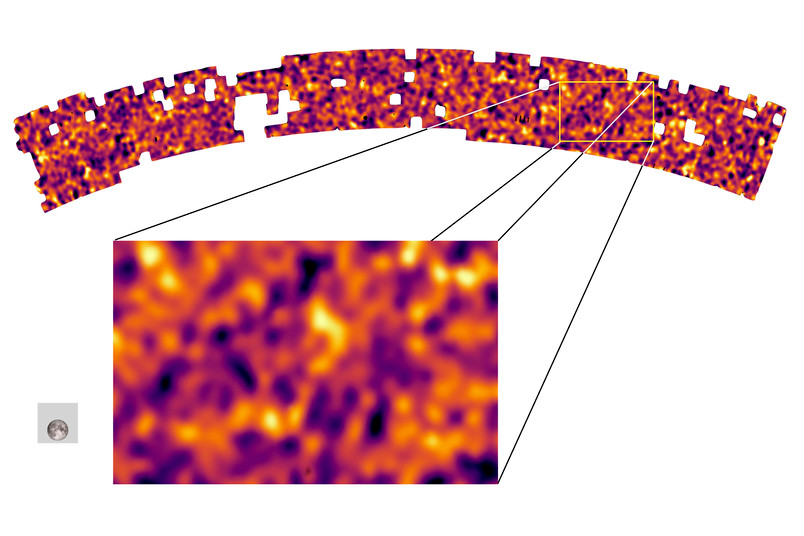 The researchers make the distribution of matter visible in such maps. The gray square shows the size of a single recorded map, with the moon in it as a size comparison. The overall map consists of more than 1,000 images. Areas of high density are shown in yellow, and areas of low density are shown in pink.
© B. Giblin, K. Kuijken and the KiDS team

Over time, the gravity of matter makes the universe less and less homogeneous. Areas that have a little more mass than average attract matter from their surroundings. So the differences in the distribution are getting bigger and bigger. At the same time, the expansion of the universe counteracts this effect. Both processes are driven by gravity and are therefore suitable for putting the standard model of cosmology to the test. The equations accurately predict how much the density of matter will change over time.

Experimental data do not fit the standard model

However, the data from the Kilo-Degree Survey reveal a discrepancy: the universe is ten percent more homogeneous than it should be according to the standard model. “The standard model of cosmology has been describing all cosmological observations that we make for 20 years. However, it is somewhat unsatisfactory that one has to accept mysterious substances such as dark matter and dark energy. That is why we try to test this model as best we can, ”says Prof. Dr. Hendrik Hildebrandt, head of the observational cosmology group at the Ruhr University Bochum.

The current analysis could indicate that the Standard Model is cracking. It is not the first discrepancy, and the so-called Hubble constant, which represents the rate of expansion of the universe, does not match the predictions of the model. "These discrepancies could of course be caused by systematic measurement errors," admits Prof. Dr. Catherine Heymans (University of Edinburgh) who, together with Hendrik Hildebrandt, heads the German Center for Cosmological Lensing at RUB, where she also holds a visiting professorship. “But the measurements are becoming more and more precise, so that this is becoming increasingly unlikely,” Heymans continues.

The researchers cannot yet estimate whether the standard model will ultimately have to be replaced by a completely new theory, for example by replacing Einstein's general theory of relativity. “There are many theories that try to explain the measurements with new physics,” says Hendrik Hildebrandt. “As an observing cosmologist, one tries to remain impartial and to make the measurements as accurate as possible without theoretical prejudices. One thing is clear, we live in exciting times! "

In one to two years the final map of the Kilo-Degree Survey will be available, with all the observations made in the project. It will be another 30 percent larger than the current map.

Two other projects, one US and one Japanese, are currently working on similar analyzes based on observational data. Even better measurement technology will be available from 2022: the Ruby telescope, which is 60 times more powerful than the VST, and the Euclid satellite, which will be able to take significantly sharper images outside the atmosphere than the earth-based telescopes. Many members of the Kilo Degree Survey Consortium will also be involved in these projects.

The Kilo-Degree Survey is an international project led by astronomers in the Netherlands, Scotland, England and Germany. The project coordinator is Prof. Dr. Koen Kuijken from the Leiden Observatory in the Netherlands. Other partners come from Italy, Australia, Poland, the USA and China.

The selected images are downloaded as a ZIP file.
You will find picture lines and picture credits after unpacking in the included HTML file.
<?