From osteoclasts and osteoblasts

Definition: Bone remodeling - is an ongoing process in which bone tissue is broken down (osteoclasts) and newly formed (osteoblasts). In the case of osteoporosis, this process is disturbed and the process is no longer in balance.

The »bone remodeling is a continuous and uninterrupted process, in the course of which old bone tissue is removed by osteoclasts (the bone degradation cells) and, in parallel, new bone substance is formed by osteoblasts (the build-up cells). To put it simply: make new out of old.

Bones, although they appear so rigid and static, are not an inanimate substance, they are actively living tissue. And they constantly adapt to changes in external conditions. This adaptation to the 'changes in external conditions' sounds less abstract if we imagine the bones, as well as our entire body, as a very economically working system. The external conditions are tasks that the body has to perform - in the case of bones, this is the provision of a certain stability. Quasi what we ask of the bones in terms of support and stability when we are working or when we are moving.

If the bone is loaded, it builds up -
if it is not burdened, it degrades.

The importance of exercise is emphasized again and again. But not only with osteoporosis, but fundamentally. While movement is more aimed at the vitality of the muscles, with bones it is the load - the force that acts on the bones. Bones have to be stressed (»Wolff's law and stress strengthens). If they are not stressed, the bone is broken down as part of bone remodeling. What is not needed is dismantled. And this conversion is considerable.

Bone remodeling is a continuous process. And also a process that has not yet been clarified down to the last detail. Bone remodeling is controlled by a complex interplay of hormones, vitamins and minerals in connection with movement and physical activity. If there is a lack of stressful and invigorating impulses through exercise or a healthy diet, the development of the bone structure suffers.

Medicine assumes that about 3% of the cortical bone and about a quarter of the trabecular bone are remodeled each year. Since the processes are interwoven, it can be estimated that a complete remodeling of the entire human bone substance takes about ten years.

Why is it also referred to as a repair mechanism? Like other tissue, such as our skin, which is constantly renewing itself, the bones need new substance. This conversion means swapping old for new - this also applies to the bones, including osteoporosis. In the course of the process, however, care is also taken to ensure that repairs are not only carried out but also. Defects are eliminated.

The »microfractures of the trabeculae within the» bone structure are repaired and the reconstruction is carried out according to the demands on the bone. These requirements are also dictated by the forces acting on the bone - with higher loads the bone strengthens, with lower loads it adapts, becomes weaker and provides less stability. This process is very slow, but it works - it takes months and years. Nevertheless, the bone builds up substance (also in old age and also with osteoporosis) when it is stressed.

A picture of the bone remodeling 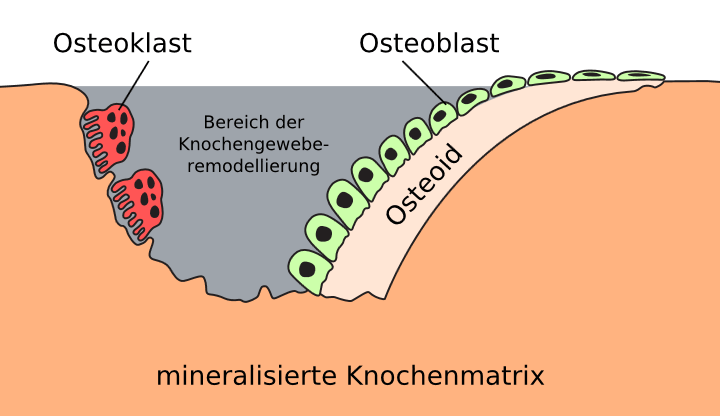 Above ↑: A lively remodeling takes place in the bone. The osteoclasts (breakdown cells) eat up the old bone substance, the osteoblasts (build-up cells) take care of the new structure. This remodeling cycle takes place in microscopic areas on the bone and takes about three to four months.

Bottom ↓: Image taken with the electron microscope: Osteoclast during bone resorption. The term resorption describes a process in which the body's own tissue is absorbed by cells. Here it is a bone degradation cell that removes the top layer of a bone. (By kind permission of Alan Boyde - Bone Research Society) 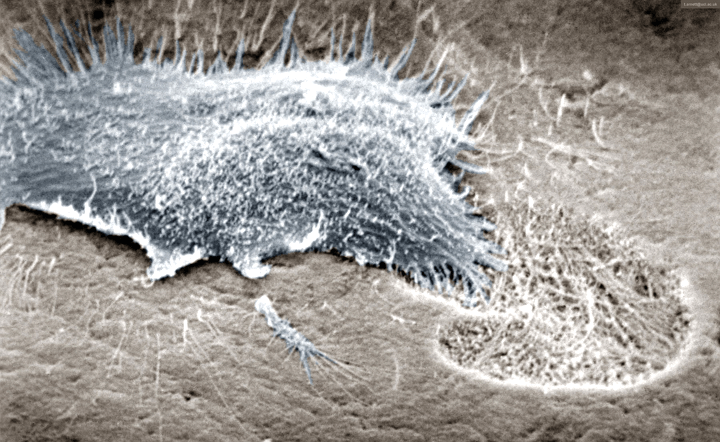 The syllable 'osteo' comes from the Greek and stands for bone, hence the term osteoporosis for bone loss. But the designation of the cells that are built up and broken down in our bones also makes use of the Greek language origin:

The osteoblasts produce the bone matrix, the bone tissue. The osteoclasts specialize in breaking down the bone substance. There is no such thing as good and bad, because both osteoblasts and osteoclasts belong together and work together on the bones. Osteoblasts will preferably only build something new where the osteoclasts previously removed tissue that is no longer required.

There is also a third cell type, the osteocytes. Presumably, osteocytes control the reshaping of the bone in accordance with the external pressure load - they also serve as a guide in bone remodeling by converting information into biochemical signals under mechanical load (see 'external conditions' above). One can also say: among other things, osteocytes also set the direction. 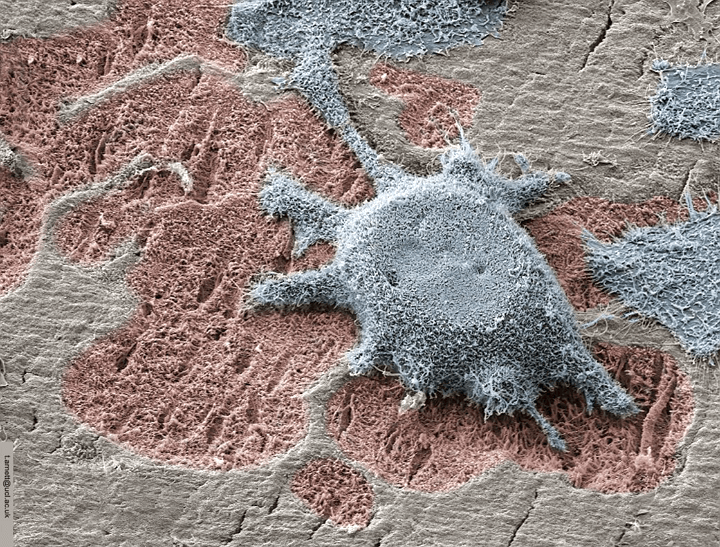 Image taken with the electron microscope: Osteoclast removes the upper cell layer of a bone and thus prepares the basis on which osteoblasts can build up new bone substance (bone remodeling) (© Bone Research Society)

You will come across the two terms antiresorptive or osteoanabolic again and again when reading texts on the therapy of osteoporosis. We cannot do without it either and it makes sense to understand these different effects. Let's put this into German for a moment:

And it is precisely these two therapeutic approaches, the antiresorptive or the osteoanabolic approach, that also describe the two most important forms of (drug) therapy when bone remodeling is to be influenced. On the one hand, it can support the activity of building up or, on the other hand, it can reduce the breakdown.

The strength of the bone results not only from the mineral density (bone density), but also from the structural quality of the bones. Significant suppression of bone remodeling can lead to prolonged new mineralization and, as a result, insufficient repair of »microfractures.

In the long run, this can even increase the fragility of the bones again. Or the other way around: patients with advanced bone structural loss benefit from the improved bone microarchitecture. And that's mostly the case with osteoporosis. With this in mind, you should always pay attention to balance - not only with the bones, but also with the therapy.

Summary: Bone remodeling and repair mechanisms are determined by

Bone remodeling is a continuous process: bone tissue is broken down (osteoclasts - bone resorption) and newly formed (osteoblasts - bone formation). This remodeling ensures the vitality of the tissue and stability of the bones.