What are some uses of circular polarization

Two such glasses are required for the observations discussed here. 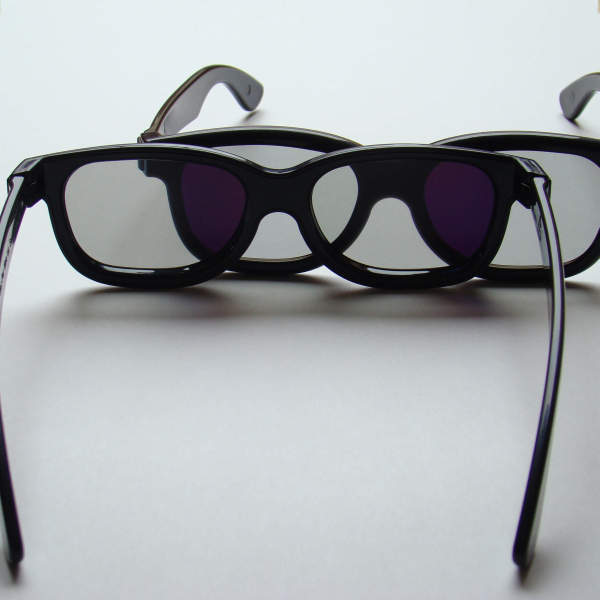 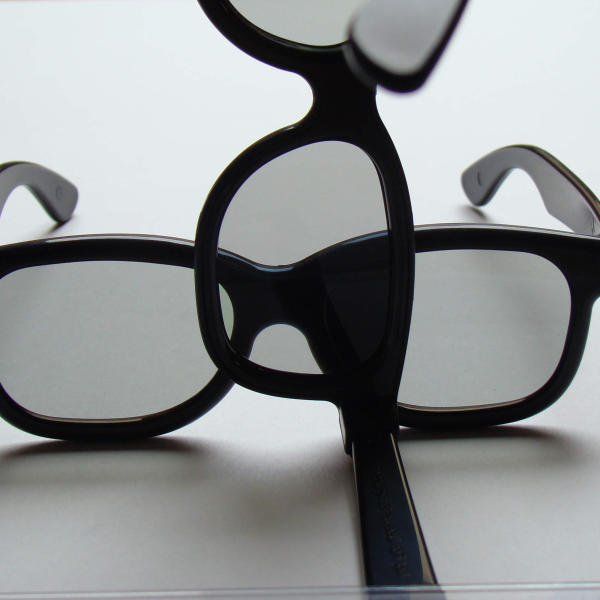 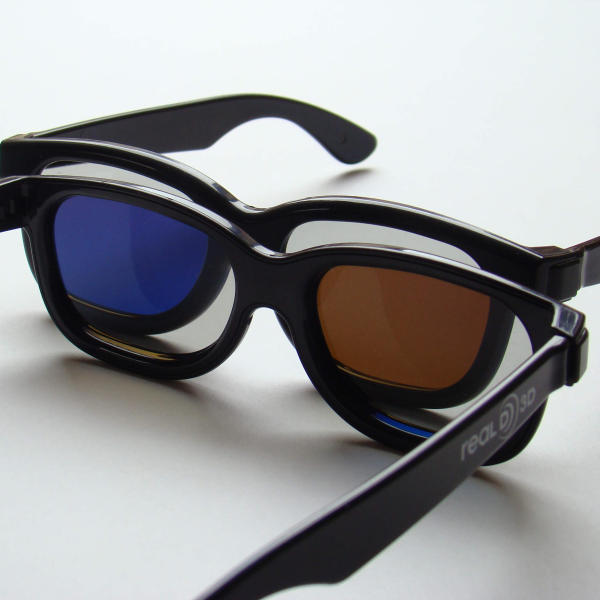 In the left picture you can see how the right spectacle lens makes the left one behind it appear dark, while the right one remains transparent. It can also be seen that the dark area is not black or dark gray, but dark purple. This is no longer the case in the middle picture: here the dark area is black. Finally, the third picture shows how when looking at an angle through two opposing glasses it is not dark purple, but blue and brown that appear.

Our eyes are not designed to perceive polarization. In addition, circularly polarized light rarely occurs in nature. Therefore the following pictures seem rather strange except for the first one.

In both rows, the glasses in the left picture are on a shiny aluminum foil, in the middle and on the right on a black glass plate. The photos in the lower row were taken through a right lens as a filter in front of the lens. This is rotated by 90 ° in the picture on the right.

The cause of the various effects is that the light reflected by glass is linearly polarized at the selected viewing angle and that the handedness of the circular polarization is reversed when it is reflected on metal.

In the case of glasses, the λ / 4 plate is made of a stretched plastic film. The expansion increases the refractive index for light whose electric field oscillates in this direction (extraordinary ray) and it becomes slower. This direction is called the slow axis of the retardation film. The fast axis is perpendicular to it.

The spectacle lenses consist of horizontally aligned linear polarization filters that face the eye and the retardation film on the outside, with the fast axis running from top left to bottom right on the right lens and from bottom left to top right on the left.

A right circular wave, shown on the left as the sum of two linearly polarized waves, on the right as an animation that can be switched on by double-clicking and off again by clicking on it.

Explanations of the pictures

The quarter-wave layer fulfills the condition of shifting the ordinary against the extraordinary ray by exactly a quarter of the wavelength, precisely for only one single wavelength. This is best chosen where the eye is most sensitive, i.e. around 555 nm. This has the consequence that, for example, the left lens, which should only let through left-circularly polarized light, is long-wave (red) and short-wave (blue) The area still lets in a little right-hand circular light - instead of black you can see (Fig. 1) a dark purple, the mixture of (little) red and (little) blue. Accordingly, when passing through the linearly polarizing filter and the downstream quarter-wave plate, unpolarized light only becomes exactly circular for one wavelength; for all other wavelengths, a portion of the opposite direction of rotation remains, albeit a very small one. If the electric field is illustrated by a vector, its tip describes an ellipse (elliptical polarization) in this case.

For film projection, however, this undesirable addition of color can be completely avoided: the polarizing filter only needs to be rotated by 90 ° in relation to the analyzing filter, i.e. it must be vertical. The second picture shows this. The two mutually twisted quarter-wave plates cancel each other out, the extinction is as good as with two crossed linear polarization filters.

The wavelength for which the "quarter-wave condition" is met also changes when the light passes through the filter at an angle. How this works can be seen in Figure 3, but it is a bit more complicated to explain.

Let us follow the path of the light: Coming towards the viewer, it first passes a linear polarizer, then the λ / 4 layer above, after a short path through air, next the λ / 4 layer of the second pair of glasses, which is oriented in exactly the same way like the one passed through first, and finally a polarization filter again, which in turn is oriented exactly as the first one; both allow only horizontally polarized light through.

One can easily convince oneself that polarizing filters are not very sensitive to moderate tilting. On the other hand, tilting the two λ / 4 layers, which together are equivalent to a λ / 2 plate, affects the phase shift between the ordinary and the extraordinary ray. As a result, the wavelength for which the path difference is actually λ / 2 depends on the direction of inclination and the angle of inclination.

The glasses in the left half of image 3 can be seen tilted around the slow axis, those in the right half of the image tilted around the fast axis. When tilting, the path length that the light travels in the retardation layer increases. As a result, when tilting around the slow axis, the path difference becomes greater, the maximum extinction then takes place with longer waves and the short-wave, blue components then predominate in the transmitted light. When tilting around the fast axis, the angle between the extraordinary ray and the optical axis and with it the refractive index becomes smaller, this has a stronger effect than the lengthening of the path and in the transmitted light the longer-wave, yellow and red ones become stronger.

For the next three pictures, a right spectacle lens was held as a filter in front of the camera lens. Figure 7 shows that the handedness of circularly polarized light is reversed when it is reflected on metal. The fact that the dark glasses do not appear purple but blue is again due to the fact that you look at them at an angle and the delay layer therefore appears to be tilted around the slow axis.

The cloudy, gray sky, which is reflected in the glass plate, appears yellowish in image 8 and bluish in image 9. Why?

The light reflected by the glass plate is almost completely linearly polarized, the direction of oscillation is horizontal.

The quarter-wave layer turns it into circularly polarized light, but only completely for the middle wavelength. For longer waves, the shift is less than a quarter of the wavelength, resulting in elliptically polarized light, with the major axis of the ellipses lying horizontally (if the shift is zero, the light remains horizontally polarized). For short waves the displacement is greater than quarter-wave, again the polarization is elliptical, but the major axis of the ellipse is now upright. The horizontally polarizing filter in the glasses allows more than half of the longer waves to pass through, and less than half of the shorter waves, and the gray becomes reddish-yellow.

Light that was originally polarized vertically, on the other hand, suffers a color shift towards blue.

Instead of changing the direction of polarization of the incident light, you can tilt your head by 90 °, then you can see the bluish gray sky reflected on the glass plate. In Fig. 9, the right spectacle lens held in front of the lens is rotated by 90 °.

The RealD homepage provides information on the RealD procedure in the corresponding section.

Back or to the overview "How does color come about?"