Classic in the tunnel - matinee concert in the Gallery Mytoro 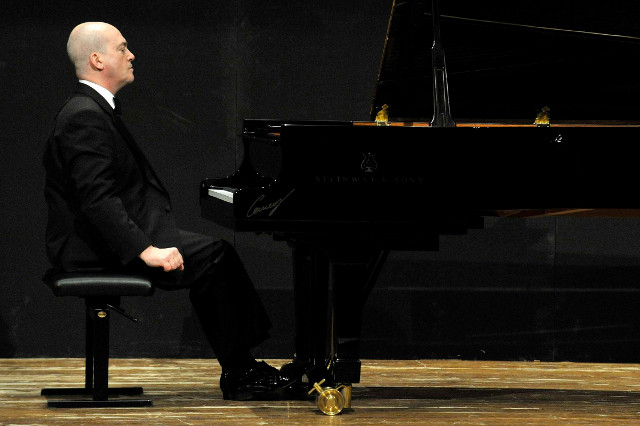 Gallery Mytoro and Hamburger Kammerkunstverein invite you to the 2nd season of the chamber music series "Klassik im Tunnel".

Admission is free and physical well-being is taken care of. The number of places is limited, we ask for a reservation by phone at Gallery Mytoro at 040/55431313 or by email at [email protected]

This sonata is the second of a collection of three sonatas that were published together as Hob. XVI 40 in G major, 41 in B flat major and 42 in D major. Haydn composed the sonatas in 1784 and dedicated them to Princess Marie Esterhazy, whose family he was employed by. In connection with the year of its creation, it is noticeable that Haydn and Mozart met this year. A relationship based on mutual admiration immediately developed between the two composers. The six so-called “Haydn Quartets”, which the younger Mozart dedicated to Joseph Haydn, are a tangible consequence of this encounter.

However, a comparison between what Mozart composed for piano that year for Haydn's sonatas hardly provides any indication of the influence of the two composers on one another. Mozart worked among other things. During this time he worked on his most dramatic and mostly forward-looking piano sonata in C minor, K. 457, while Haydn's sonatas at that time dealt with a much more cheerful mood.

The first movement, a lively and concise sonata movement, begins with a playful, almost flirtatious and humorous opening in a march-like dotted rhythm, which Haydn then breaks up later in the second theme. In contrast to the first, this second theme is a graceful and thoughtful melody, accompanied by simple triplets, almost like an aria. The development - quite typical for Haydn - abruptly gives way to a drastic modulation in D flat major. No other composer knew better at making the audience collectively hold their breath in his performances than Josph Haydn. At this point, Haydn creates a moment of extreme instability! He does this with the greatest intelligence and underestimated wit.

The second movement is an equally refined rondo movement. The beginning of the movement bears a certain resemblance to the structure of the giant "Hammerklavierersonate" op. 106 by Ludwig van Beethoven, composed about 36 years later. While the close relationship between Haydn and Mozart is discussed again and again, it is all too easily overlooked, actually: misinterpreted, that Beethoven was also a great admirer and connoisseur of Joseph Haydn's work. It is highly unlikely that even this light and humorous sonata (in the same key as the Hammerklavier Sonata, by the way!) Could have escaped Beethoven's attention.

Historically, Schönberg's piano compositions are of great and influential importance, although - unlike his contemporaries Bartók, Stravinsky and Prokovieff - he was not a trained pianist. His piano work is much more varied than that of his closest colleagues Alban Berg, whose only piece for piano is the Sonata op. 1, and Anton Webern, who also left one single piano piece, Variations, Op. 27. Schönberg composed 4 collections of piano pieces op 11, 19, 23, 33, a suite op 25 and of course his piano concerto op 42.

In his preference for small forms, within which he experimented with new compositional ideas and techniques, Schönberg can be compared with Johannes Brahms, whom he valued for his progressive and equally experimental nature. The musical sensibility these two composers have in common is often overlooked. Despite all the innovative approaches to his compositional techniques, Schönberg was a composer with very romantic roots. He stood in the German-Viennese tradition of Haydn and Beethoven, which his wonderful book "Basics of Musical Composition" illustrates very well.

The piano pieces op. 19 were composed in 1911. They represent perhaps the most concentrated work of the composer. The inner main idea of ​​this music is melodic, carefully woven into an atonal frame, although the memory of harmonic dissolution seems to float above this music, especially at harmonic turning points and at some phrase ends.

The brevity of the pieces, their quiet timbres and the work with small fragments or cells of the melody show a greater affinity for Anton Webern than any of the other works by Arnold Schönberg.

The first piece, with 17 bars, is the most extensive in the collection. It consists of eight delicate phrases that are interrupted by tiny cadenza-like interludes. These little interludes are unmistakable in their dotted rhythm and extremely filigree arperggios.

In the second piece, a static, rhythmic motif is in the center on a minor third. A short melody flows over this repeating third motif. Gorgeous !!!

In the third piece, Schönberg juxtaposes dense forte chords in the right hand with melodic contours in the left hand in pianissimo octaves.

The fourth piece begins very gently with airy dotted rhythmic figures and ends in brutally hammered reversals of this opening.

The fifth piece, a ghostly reminiscence of a minuet, also begins very calmly and then explodes after a very short time in cascades of falling major and minor thirds.

The last piece from op. 19 is an extraordinarily poignant homage to Gutav Mahler, who died two weeks before Schönberg wrote the piece. It is assumed that this piece can be classified as a kind of anti-funeral march in which the accents on the heavy beats are eliminated. In this piece Schönberg works with absolute extremes of quiet dynamics, at the end he prescribes a quadruple pianissomo with the comment “like a breath”.

If you think of the genre “piano music for four hands”, you first think of house music and sociable and carefree music-making. The genre played a major role in the spread of symphonies, opera tunes, folk songs and marches before radios and phonograms became available. There are also some sonatas by Mozart that were used for domestic music-making.

The Sonata in F major KV 497 from 1786, on the other hand, is a masterpiece from the pen of Mozart, which is rather coincidentally composed for piano four hands. From a purely technical point of view, this sonata would in very few cases be suitable for amateurs. The musical draft of this work could just as easily have been done for a string ensemble or an orchestra.

It is Mozart's greatest piano sonata for four hands. With it he created a tradition in which composers such as Schubert, Brahms and Mendelssohn moved later. Within the four-hand repertoire there are only a few works that are similarly symphonically expansive and artistically built in their layout.

The first movement opens with an introduction that is both dramatically threatening and calmly questioning. The main theme, which is initially presented by the first pianist alone, is reminiscent of a typical woodwind section. The secondary theme, actually more of a motif than a really mature theme, is carried out in the exposition in such a way that a second secondary theme arises. In their lyrical character, these secondary themes represent a wonderful contrast to the main theme. The development of the first movement is often praised by scholars as one of the greatest developments in Mozart's oeuvre: On the one hand, the thematic interweaving is almost unprecedented; which Mozart had not yet announced in the exposition, very much in relation to the exposition, which means that Mozart gave the sonata form a completely new content without leaving or breaking the actual form.

The second movement is a filigree Andante, which is also based on two themes that set each other apart, especially in terms of their dynamics. However, it is formally not a sonata movement, but a three-part song form.

The finale, an extremely brilliant rondo that can hardly be surpassed in terms of ingenuity, rounds off the sonata. The playful ritornello provides an excellent basis for the various character contents in the episodes of the rondo. Often the cheerfulness of the ritornello is disturbed by dark, virtuoso interludes, and often it is exaggerated by even greater joy in playing in other places - a firework of compositional masterpieces.

This sonata was composed in Vienna in 1802. It is an excellent example of Beethoven's gradual further development of the strict sonata form towards individual form structures. This endeavor played an essential role in Beethoven's work, especially in the sonatas of the middle and late periods. None of the four movements is in the form of the sonata main movement: the first movement is a theme with variations, the second is a fast, refined scherzo with trio, the third a funeral march, and the finale is a rondo.

This resulted in a combination of formal structure and expressive content that was new at the time. This makes the music appear less formal and more flowing than Beethoven's earlier works. The two following Beethoven sonatas op. 27 are entitled “Quasi una fantasia”, this designation could be in direct connection with the experiments with which Beethoven began in the A flat major sonata op.

The key of A flat major traces the composer's expressive and lyrical attitude; the slow movement of his perhaps most famous sonata, the “Pathétique” op. 13 (C minor), is in this key, as is the extraordinary slow movement of the somewhat less well-known Sonata in C minor op. 10 No. 1. In both cases Beethoven uses the key of A flat major for the slow middle movement to breathe a sigh of relief in the midst of the drama and the tension of the corner movements in the basic key of C minor. Here Beethoven created a key relationship that is referred to in music theory as “counter-sound” or “lower and upper mediante”, which has become a fixed term in the harmonic thinking of composers. Franz Schubert's harmony is also very strongly influenced by this Beethoven finding.

At the end of his career, Beethoven composed a second sonata in A flat major. This is the sonata op. 110, which takes up the expressive-lyrical aspect of the sonata op. 26 again and takes it to the extreme.

Both factors, the formal structure and the harmonic relationships of the Sonata Op. 26, apparently caught Frédéric Chopin's eye as well. He admired this sonata very much and taught it often. It is also possible that the third movement, the funeral march, was a kind of starting point for the funeral march that Chopin composed in his Sonata in B flat minor, Op. 35. An inner difference is that Beethoven's funeral march is due to a fallen hero, while Chopin is about an abyss of sadness, loneliness and loss.