Why shouldn't you reward children

Too Much Carrot: What Rewards Trigger in Children

Children enjoy rewards. But if you reward children in order to convince them of unloved tasks or good behavior, you will achieve the opposite in the long run.

Many children are brought up on the stick and carrots principle. Image: iStock

"Anyone who has done their homework well ten times receives a joker tag," says the math teacher. The conductor asks the children's brass band: "If you practice this piece well now, we will play what you want at the end of the lesson." And the mother promises: "If you clean up your room, you can watch the football game on TV tonight!" Anyone who promises a reward wants to honor the child's performance. That is well-intentioned, but from the point of view of more and more education experts, it is badly done.

In his book “Punished by Rewards”, the American author Alfie Kohnen used many studies to show why an upbringing with rewards only works in the short term, but has to fail in the long term. "Rewards, the post-modern version of punishment, should be banned," says education expert Jesper Juul. The family counselor Katharina Saalfrank, known from television, says: "Ultimately, rewards are a form of punishment."

Parents have only just bought a set of smiley stickers on the advice of educational experts in order to motivate their children to do homework and chores with a sophisticated reward system. Everything wrong again? And what is harmful about a new sticker for the scrapbook after brushing your teeth? Because it's nothing but bribery, Kohn believes.

Most of the time, there is manipulation behind a reward 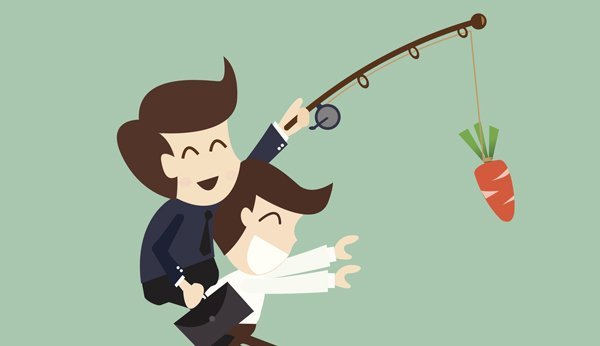 Rewards motivate, but for the wrong reasons. Image: iStock

Parents often feel for themselves that rewards are “a double-edged sword”, as the psychologist and head of the Zurich Academy for Learning Coaching, Fabian Grolimund, writes. Rewards have a negative aftertaste. Because very often the attempt to manipulate a child is hidden behind a reward. It should do what the parents expect of it and what they believe is important for the child: jumping from the edge of the pool, exerting yourself at school, visiting the grandmother, eating broccoli.

Manipulations are therefore very easy to recognize from if-then sentences. And they are used over and over again because it seems to work. From parental home to daycare and school. And it doesn't stop in professional life either. There it simply says bonuses instead of rewards.

If parents still have a queasy feeling that there is only a chocolate dessert for vegetables that have been eaten, it is probably because they subconsciously know that something is wrong here, that they have taken an illegal shortcut. After all, which message is most likely to get through to the children? A dessert is worth even eating broccoli.

Would you buy a child?

It can be harmful for children to find themselves repeatedly faced with such decision-making dilemmas. Because with the prospect of a reward, they do something that they actually would not do: they allow themselves to be bribed. Eating broccoli becomes an unattractive food that you don't need to eat without the prospect of dessert. And the children also feel that they have been bought. But they also learn quickly. If I voluntarily brush my teeth and then go to bed immediately, can I still watch a program? If I write a five in French, will I get the computer game? If I do the laundry for a week, can I go to the concert with my friends?

In science, this unintended consequence of rewarding is also known as the corruption effect. The inner drive to do something is replaced by an external drive.

In addition to the corruption effect, there are three other major disadvantages of rewards as a means of education.

An attractive reward tempts you to do what is asked - and ignore your own inner voice. A child does not learn to act out of conviction. And it is not supposed to learn to resist manipulation and confidently say "No!" accept.

Alfie Kohn believes that reward is a means of dressage. Just as a horse is trained with a carrot and stick, so too is an education based on rewards and punishments. Because if you promise a child a reward, you leave eye level and place yourself powerfully above the child. In addition, rewards make you dependent in the long run. Because adults like parents or teachers determine whether a performance is worth receiving a wage. And often they give the child not only the goal, but also the way in which the goal is to be achieved.

Children feel the mechanism behind the reward system. If they do not do what is asked of them, there is no reward. That then works as a punishment, explains Katharina Saalfrank.

But can a child think and decide everything for himself without harming himself? Child psychologist Kay Rurainski is convinced that a relaxed upbringing on an equal footing is possible. He advocates a style of upbringing that does not value children, but values ​​them separately. "In a family in which a cooperative and democratic relationship is cultivated, the family members are closer and the relationships are more intimate than in families in which parents approach their child in an authoritarian manner," says Rurainski. "At the same time, the child develops a good portion of self-confidence, self-respect and independence - necessary prerequisites for a fulfilled life."

When rewards can make sense

So should we forego rewards altogether for the sake of the children? Are children happy about a little recognition? Alfie Kohn explains that rewards are less harmful if they are not announced in advance, so if they are not the incentive to do something.

The psychologist Fabian Grolimund believes: “Rewards can be a support for both children and adults. They can serve as a kind of crutch that makes it easier for us to walk until our legs have enough strength to carry us. " Rewards could be a useful tool, especially if a child finds important actions very difficult or uncomfortable. It is important that rewards are only rarely and carefully used in connection with a certain activity.

This assumption also coincides with the scientifically well-researched corruption effect. This only works if there was already an initial motivation, i.e. if the child would probably have eaten the vegetables without the prospect of chocolate. But if the child doesn't even think about trying it, the prospect of a reward could at least lead to the child perhaps biting off after all - and perhaps discovering that vegetables can taste quite good after all.